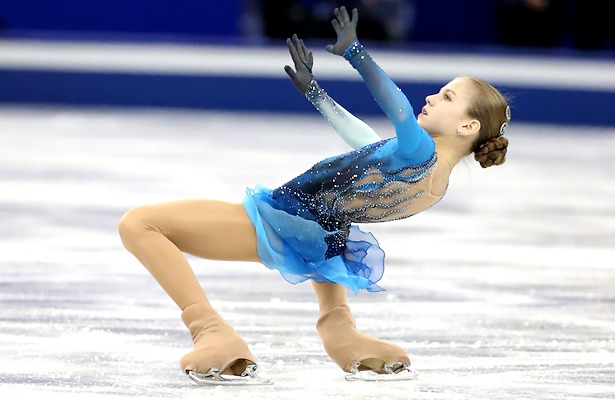 Russia’s Alexandra Trusova jumped right into the history of figure skating after landing two quadruple jumps in the long program on her way to gold at the ISU World Junior Figure Skating Championships in Sofia, Bulgaria, in March. The 13-year-old student of Eteri Tutberidze’s famous training group, also home of Olympic Champion Alina Zagitova and two-time World champion medalist Evgenia Medvedeva, set two records at the same time: She became the first female skater to land a quadruple toe and the first to land two quads in one program – 15 years and three months after Miki Ando of Japan became the first, and until now, only woman to perform a quad in competition.

“I want to be the first one in the world who does something, therefore I am working on the triple Axel, quad toe and other quads,” Trusova stated. Well, she did become the first in the world to do two quads. The skater first wanted to learn the triple Axel when she was only ten years old and still skating in her home town of Riazan, about 200 kilometers from Moscow. She tried again when joining Eteri Tutberidze’s group in 2016. When the triple Axel still didn’t work out, the skater, along with her coaches Tutberidze, Sergei Dudakov and Daniil Gleikhengauz, decided to go for a quad.

She landed it the first time a year ago in April 2017. “The quad toe I started to learn after the (Junior) Grand Prix Final in December. It was already easier than the Salchow,” Trusova shared. “The Salchow and the toe are similar. Just the Salchow is an edge jump and the toe a toe pick assisted jump. The Salchow is more comfortable for me, but Daniil Markovitch (Gleikhengauz) says that my toe is better.”

The teenager then set her next goal – a quad Lutz. A video appeared on Instagram that showed her landing what is considered the most difficult quadruple jump currently performed in competition. While the jump appeared underrotated, it was still impressive.

“A quad has only one rotation more,” Trusova pointed out. She first tried the quad Lutz on the harness. “I used to do my (triple) Lutz with both arms up and needed first to do it again without my arms.” But the triple Axel is still nagging at her. “I need to learn it. Doing quads without a triple Axel is weird somehow.”

One might ponder how a young, delicate girl can perform quads – a challenging jump that not all men can do. Part of the equation is her center of gravity, height, and weight. The rest is training.

“She (Trusova) has very good jumps,” said coach and choreographer Gleikhengauz. “She is physically very well prepared, she is a very strong girl – physically and mentally.”

The team went for the goal step by step. First, Trusova increased the height of her triples and worked a lot on the harness and wore padded pants to avoid injuries. “We’ve worked for half a year or a bit less on it,” said Gleikhengauz. “We did not rush it.”

Most importantly, it was the skater herself that wanted to learn quads and was not afraid of trying, despite unavoidable hard falls.

“The quad has one rotation more, because you jump higher,” Trusova explained. “When you fall from height, it not nice, obviously. When I am falling, everyone turns away … but in fact, it only hurts when falling on the hip. How I fell on the quad in the Grand Prix Final didn’t hurt much. Everyone said ‘terrible,’ but I wasn’t hurting. I am not afraid of falling. When I train quads, I am wearing padded pants so that it doesn’t hurt to fall and therefore, it’s not scary.”

The World Junior champion doesn’t feel that she has special abilities, and even pointed out that she doesn’t rotate fast.

“I can do it because of the height of the jumps,” she said. “I jump that high naturally, I guess, but when you train the jumps every day, everyone can learn it. You just need to go and do it and not be afraid. I really wanted to do it and I was not afraid of trying. When you really want it, you can achieve anything.”

At Junior Worlds, male skaters came and congratulated Trusova for her success. Among them was Alexey Erokhov, who won the title and is training with her in the same group.

“Lesha (Erokhov) is always giving me advice about how to do the quads,” Trusova revealed. “He does these jumps as well. He has three quads and two triple Axels in his program. When the coaches are busy, because we have many athletes, especially when only one coach is left, then Lesha helps me and tells me what to do.”

She actually would love to compete with men. “Unfortunately, that is not possible,” she said with a sigh. With her score at Junior Worlds of 225.52 points, Trusova would have been second in the men’s event, and considering that fact that the men have one more jumping pass and a higher factor for the program component score, she even would have won. “I think Lesha Erokhov would not have forgiven me for that,” the 13-year-old said with a laugh.

Trusova loves to jump and the coaches sometimes must rein her in. “Sasha is very stubborn,” said Gleikhengauz. “If she wants something, she does it. Most likely you have to stop her. Tell her ‘do what you want’ and Sasha would jump for five hours. If you suggest, ‘let’s go and spin,’ she’ll answer, ‘no, I want to jump a bit more.’

She is an absolutely calm, even-tempered girl that fulfills all the tasks given to her by the coaches,” continued Gleikhengauz. “She has to work on her skating skills, the second mark. I don’t want that our athletes are disbalanced somewhere – that one is jumping well, one is spinning well or skating well. I want that they all reach their maximum level. Sasha can spin very well. She is disciplined. She knows her math. She can count well. She is a smart girl and understands that you can’t leave points on the table. You can do a quad and get a level two for two to three spins. And what is the result? Sasha understands all that.”

Off the ice, the World Junior champion is a teenager like all the others and adores her little dog, Tina. She even travels with Tina abroad when possible. “In Europe many people are travelling with their dogs,” Trusova noted. “There are a lot of pet stores and I like to dress Tina. To tell the truth, she doesn’t like that, but I’m buying her dresses, harnesses. She’s like a princess, like a living doll.”

Trusova will not be age-eligible for senior-level events until the 2019-20 season, so she has another junior season ahead of her. However, even though she has won all international junior events she entered, she is motivated for the next season. “I want to skate cleaner programs with quads. I will improve my performance to get higher scores and to set records.”