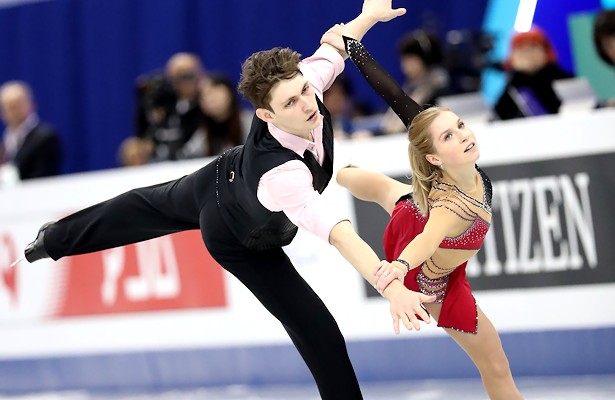 Australian pair skaters Ekaterina Alexandrovskaya and Harley Windsor are getting used to writing figure skating history. The young team won the first ISU Championships title for Australia at the 2017 ISU World Junior Figure Skating Championships in what was their first season as a team. This season, they followed up on that by becoming again the first Australians to win the ISU Junior Grand Prix Final and the first Australian pair team in many years to compete at the Olympic Winter Games.

“It’s been pretty good so far,” Windsor agreed. “I think until (winning) Junior Worlds, it was a bit unreal, but now it’s become like an expectation of us rather than a bit of a surprise. I’m happier about the way we skate now rather than just being surprised in winning a competition.”

“The past season went quite well, we got a lot of experience,” Alexandrovskaya noted. “The Olympic Games are an unforgettable event in your life, completely different from other competitions. The atmosphere is so different. It was great!” The pair also made headlines in Australia since Windsor became the first indigenous person to represent the country at Olympic Winter Games. Both his parents have Australian Aboriginal roots.

Russian-born Alexandrovskaya, 18, received Australian citizenship only last October after the team had qualified a spot for the Olympic Games. “The laws in Australia changed, so her citizenship got delayed by quite a while. We didn’t know how long the delay was going to be. So it was a little bit of a scare,” Windsor recalled. “I am very happy that I am a citizen of Australia now. I really like the country,” Alexandrovskaya added.

The team splits their training time between Sydney, Windsor’s home town, with Russian coaches Galina and Andrei Pachin and Moscow, where Alexandrovskaya comes from, at Nina Mozer’s skating school. Figure skating, and especially pair skating, is not very developed in Australia, so the Russian input really helped the them to progress fast.

Although Alexandrovskaya enjoys it when she is in Australia, she gets homesick after a while and is happy to return to Moscow. “It’s a little hard for me to be in Australia alone, without my mom and my beloved dog,” she admitted.

Windsor felt satisfied with their growth as athletes at the end of their second season as a team.

“I think we’re just a lot stronger, on ice and off ice, now,” said the 21-year-old. “We are a lot more confident coming into competitions. Last season (2016-17), every competition that we did was a new experience for us and we didn’t know how to handle it a 100 percent. But now we know what the feeling is going into competitions. I think that helped us a lot.”

Windsor has no regrets that they competed at the junior level in the first half of the season, although the couple originally had hoped to completely move up to seniors.

“I think it was the right decision to make,” he explained. “I think if we had moved up to senior (at the beginning of the season), we wouldn’t be quite as ready. I think us doing juniors and the (Junior) Final helped us a lot getting ready for the Olympics.”

Alexandrovskaya is now looking ahead. “The conclusion from this season is that we have to work as much as possible on our component score and that we need to make the technical content harder.”

The skaters are currently on vacation. Windsor went home to Australia while Alexandrovskaya was first in Moscow and then went to Turkey in mid-April. They will resume training in Australia in May.

“We will change both programs, but we have not yet decided on the music and choreographer,” Alexandrovskaya shared. “We will try to work on our component score, make the jump content and some pair elements harder.”

The 2017 World Junior Champions competed at the junior and senior level in the 2017-18 season, but now have aged out of juniors. “We hope to take part in the Grand Prix Series and obviously at the major events such as Four Continents and the World Championship,” Alexandrovskaya noted.