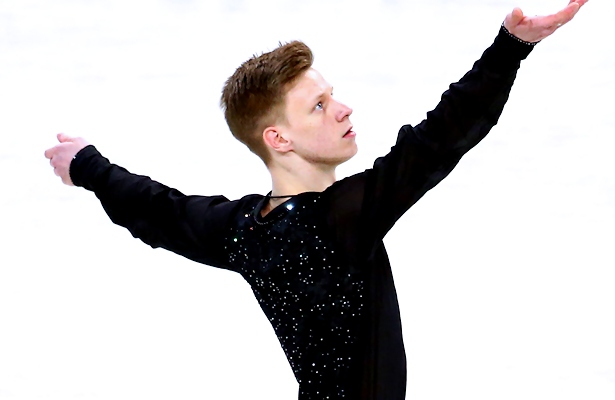 Alexey Erokhov became the first Russian to man to win a World Junior title since Andrei Griazev in 2004 in his debut at the 2018 World Junior Figure Skating Champions in March. With all the attention on stars like Olympic Champion Alina Zagitova, Olympic silver medalist Evgenia Medvedeva and quad queen Alexandra Trusova, it can be easy to overlook the fact that men are also training in Eteri Tutberidze’s famous medal mint in Moscow.

The 18-year-old sat in second following the short program and then moved up to take the gold. However, his main rival Alexei Krasnozhon (USA), who was leading after the short, had to withdraw due to injury during the free skating. That came also as a shock to Erokhov.

“I was upset that Alexei had to withdraw and I wished him a good recovery,” said Erokhov. “Before the free, I felt good, I was in fighting spirits. I went out towards the ice and Sergei Viktorovich (Dudakov, coach) turned me around and said, ‘let’s go over there and warm up. Stretch.’ I realized that something was odd. Then the music was turned down. I didn’t know what exactly had happened. I started to get nervous, because I didn’t know when I would get to skate. I tried to shut everything out and focus. It was the first time that I was in that kind of situation, but you have to be ready for anything. Anything can happen,” he recalled.

Now, with the World Junior title under his belt, Erokhov is preparing to move up to the senior level, although he still has one year of junior eligibility left.

“The coaches said it is time,” he said, “and I realize that myself. I am 18 years old. Many guys that are younger than me are already competing at the senior level. So it’s also time for me. Therefore, I had to finish the season on a high, confident note. I set myself a goal – get to Junior Worlds and win. And I did that.”

After Junior Worlds, the skater returned home to Moscow and focused on his studies at the Institute for Physiculture.

“Right after that, I started training again,” Erokhov shared. As usual, he is working with coaches and choreographers Daniil Gleikhengauz and Eteri Tutberidze on his programs.

“We are changing both programs and the short is almost ready,” he said. “This is a new style for me, but I hope that I will be able to fully transmit the idea of the choreographer,” the World Junior Champion noted.

While Erokhov is satisfied how his season went, he remains critical of himself. While he feels he is improving, he doesn’t think it’s enough for the senior level.

“I will try to catch up in the off-season and try to improve a lot,” he offered. “I want to improve my skating skills, spins and, of course I need to work on consistency. The Russian men are not really setting themselves apart by consistency, but I will try everything that will work for me.”

The skater believes he needs to do more run-throughs of his program in order to achieve consistency.

“We are skating a lot of programs in practice,” said Erokhov. “I already start to look at competitions as nothing special and I am less nervous than I used to be. A lot of mistakes happen because of nervousness, because you start doubting yourself. But when a lot of work has been done, you go out and you realize that you did everything in practice and now it is what? It is the same ice, there are only spectators.”

The judges are not an additional factor that makes him nervous. “Our coaches are like judges. Basically there is no secret. In competition, you have just to go out and do the same job that you’re doing every day in practice.”

Erokhov usually does one run-through of each program every day in practice. “But sometimes I do two long programs. It depends on how you skate your program the first time,” he said with a smile. “It teaches you to overcome yourself. We are always thinking that we can’t do something, that our organism doesn’t cope with that workload. But I realized recently that this is not the case. I thought, I can’t do more, but the coaches said, ‘you can.’ And it worked. You just don’t have to doubt yourself.”

The World Junior Champion is enjoying the process of practice and work on the ice. “I like that process of developing myself. It doesn’t work, doesn’t work and then it gets a little better. Then you get stronger and you feel that you did a good job and you did well. But you need to keep moving forward. If you achieved something, you may not stop. There is always room to grow.”

Gleikhengauz appreciates the work ethics and the character of his student. “Lesha (Alexey) is a good guy. He is an educated, smart boy. He is an example of commitment, especially among the boys. Boys at times can be lazy, scatterbrained, but Lesha is very responsible. He is serious about the training process and the attention of the coaches.”

The coach knows that talent alone is not enough to become successful. “There are people that are super talented: didn’t do anything, comes and it works right away. That happens if someone is very gifted. But everything that Alexey has learned, he has achieved through his work. He knows the value of each result. And the victory at Junior Worlds is very important to him. It took him many years to get there, competing with guys that were ahead of him. These are Moris Kvitelashvili, who then still competed for Russia (and now for Georgia), Vlad (Vladislav) Tarasenko, Adian Pitkeev, Seriozha (Sergei) Voronov. They all were better than Lesha. But he tried, he made an effort, he worked hard.”

Erokhov has landed the quad toe and Salchow in competition and did also the quad flip and loop in practice before the Junior Grand Prix Final, but then stopped working on them. He wants to get them back now. “I’ll try to do them consistently. Maybe I’ll show them next season, but I can’t tell for sure.”

At Junior Worlds, he did one quad toe and one quad Salchow in the long program – as did Alexandra Trusova, who trains with him under the same coaches. “When I saw for the first time how she did that in practice, I was surprised. But then Sasha (Alexandra) started to do quads all the time and I didn’t see it as something special anymore. I think that women’s skating is developing. If there is Sasha, someone else will come and do quads. Sooner or later this was going to happen.”

Erokhov sometimes gives Trusova advice on the quads. “When I see that something is not right, then I try to give a cue. I am more experienced after all. Sasha does quads for the first year. I watch and I understand where you need to make a small adjustment. She is listening to me.”

Not surprisingly Erokhov sees himself coaching in the future after his competitive career. “I can’t imagine my life without sports. I want it to be connected with figure skating in the future,” he said.

But Erokhov, who names Japanese skaters Yuzuru Hanyu and Daisuke Takahashi as his idols in the sport, still has a whole and hopefully, long career ahead of himself. For next season, he plans on competing in at least one Challenger Series event and hopes to get two Grand Prix assignments. “The goal will be as always to skate clean programs,” he said.

Coach Gleikhengauz expects good things in the future from his student. “On the technical side concerning the jumps, he has achieved a lot. Now he needs to work on his skating skills, artistry. Although I can’t say he is not doing that. With each year he gets better and better. I hope that Alexey has four years until the next Olympics. And if he will continue to work in that way, if there are no injuries, then he can compete for very high placements,” Gleikhengauz concluded.