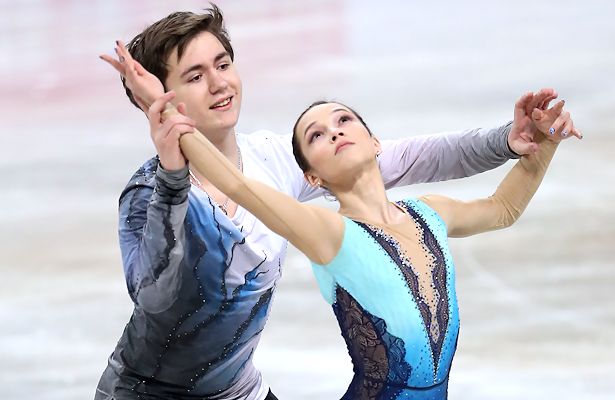 Daria Pavliuchenko and Denis Khodykin crowned their second season as a team with the World Junior Pairs title last March in Sofia, Bulgaria, leading the first Russian sweep of the pairs podium at Junior Worlds in 32 years. Now, this young team – she turned 15 last December and he will be 19 in July – is aiming to take on the senior skating world. After their vacation in the first half of May, the skaters and coaches Sergei Dobroskokov and Sergei Rosliakov are back in Moscow at their home rink and preparing for the upcoming season.

“If there are no major rule changes, notably the age eligibility, then obviously we’d like to move up to seniors, because we did already everything in juniors what we wanted and what we could do,” coach Rosliakov pointed out. “It is time to make ourselves known for the future. We don’t want to stay at the same level, but we want to move forward.”

“We’d like to try ourselves, to see how we feel (in seniors),” added Pavliuchenko. “The most important thing is to work. It is not so much difference.”

Her partner did not agree completely: “There is one lift more to do,” Khodykin threw in quickly. “We had time to rest and to build a new free program. We’re preparing new elements and we’re improving the old ones to make ourselves familiar with the new rules. We’re learning new lifts and try to make the jumps harder.”

“In fact, the senior level skating is very different from juniors, so obviously our work will change and they will change,” Rosliakov noted. “The programs have to be expressed in a more beautiful way and this has to happen, not only through body and gesture language, but also through other changes. Right now, we’re still skating like juniors. We have to get to the next level, increase the speed, increase the quality, increase the difficulty of some elements.”

Notably, the team would like to include a quad twist and a triple toe-triple toe combination into their repertoire.

At the same time, Pavliuchenko and Khodykin set themselves apart with original transitions and elements. For example, they did a rare forward outside death spiral last season and they embrace the tendency in pairs to look more like ice dancers, while doing the difficult pair elements.

“When you are watching senior pairs that are skating more like dancers, it has a completely different look,” said Pavliuchenko, who especially looks up to Olympic Champions Aljona Savchenko and Bruno Massot.

“We’ll continue in that direction,” Khodykin confirmed. “We’re working on what we have to make better and we’re learning new things. We’re working with our acrobatic coach on mini lifts (transitional lifts) and we’ll try to include them into our programs. So far, there are not that many, but with time, I think they’ll be in the short or in the free program.”

The team already has mounted a new free program, set to music from the The Great Gatsby soundtrack.

“We put together several tracks, there is a small and a fast part and we’re trying to bring across more of the story. While (last year’s free) Chicago was more about bringing across the atmosphere of that time and the mood of the program, so this time it is more about the story. It’s a story about love, dreams and money,” Khodykin explained.

The short program is not confirmed yet.

The skaters don’t feel that winning the Junior World title in their debut at the event has really changed them, but they feel even more motivated.

“You try to go all out every day,” Pavliuchenko shared. “There is motivation, maybe even more than before.”

“When you work on new elements, it is interesting, a certain thrill,” Khodykin added. “You learn and learn, and you hope it will work out and there is new interest in your work and in learning.”

Pavliuchenko especially feels that the past season has helped her to grow as a skater and a person. “It (the past season) was a huge experience, because you’re learning something new with each competition. There were many positive emotions, but also negative experiences. I learned for myself that I have to stay calm and approach things with a cool head,” she shared.

“It was an experience for stress resistancy,” Khodykin said. “In Japan, at the (Junior) Grand Prix Final, Dasha was completely different. Now she is behaving and preparing for the competition in a different way. You go out calmer on the ice, you know what is awaiting you and how your body reacts in a stress situation. I have now more confidence in Dasha. At the first competitions I asked her: ‘Please, do like in training,’ because at the first competitions, Dasha’s technique changed because of nervousness and that was the most frightening thing. I didn’t know how to deal with that.”

When she was 12, Pavliuchenko retired from skating for eight months when coach Eteri Tutberidze suggested to her to try pairs. She came back because she felt she would not forgive herself if she wouldn’t give pairs at least a try. Khodykin was a former single skater whose coaches encouraged him to do pairs as he struggled with the triple Axel.

Pavliuchenko is currently in school, while Khodykin studies sports management at university. The World Junior Champions describe their relationship as that of a brother and sister: “We fight and then we reconcile,” Pavliuchenko said.

The ISU Junior Grand Prix Final bronze medalists resumed practice in mid-May and will go for a three-week training camp to Sochi in the beginning of June. They plan to do two senior Challenger series events, probably in Belarus, Latvia, or Estonia, and hope to be selected for two Grand Prix events. Their main goal for next season is to draw attention and try to get as far as possible.

“Obviously we’d really like to (break through at the senior level) and the kids will give their maximum and do everything possible, but it will be what God gives,” Rosliakov said.