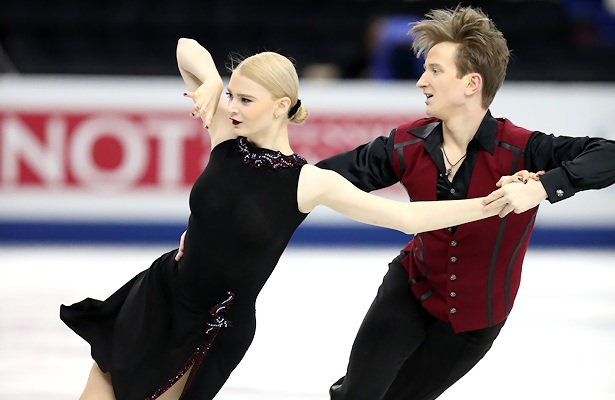 Russian ice dancers Anastasia Skoptcova and Kirill Aleshin had one last shot at the Junior World podium this year and they used it. The team took the title with more than seven points to spare, leading a Russian gold medal sweep along the way at the 2018 ISU World Junior Figure Skating Championships in Sofia, Bulgaria.

“We came a long way for this and we’ve worked hard,” Skoptcova agreed. “We showed a good result and it was a strong way to end the season. There was a certain pressure, obviously. Nobody put pressure on us from the outside, but we just realized ourselves that this is our last (junior) season and we wanted to present ourselves well. But that was a good motivation to get ready.”

“We will work,” said 17-year-old Skoptcova. “There (at the senior level) are new couples that we haven’t competed yet against. It is a new [level of] competition. We will work and get ready for the test skates (of the Russian Figure Skating Federation in September). We hope to make a splash.”

The team always sets goals for themselves, one of which is to enjoy their programs, in addition to skating clean and making the coaches and fans happy as well.

“This is so that they see we are committing ourselves fully to our job,” pointed out Aleshin, who turned 21 on April 24.

However, the transition from junior to senior is never easy, especially in ice dance.

“It’s tough. It’s [like] starting from scratch,” Skoptcova acknowledged, “but we’re ready for that. It was to be expected. After all, we can’t stay junior for all our lives.”

“Obviously, the senior level is a completely different story,” added Aleshin. “The junior results are just junior results, and in senior, many things are starting from the very beginning. But we’ll take all our experience that we have.”

Preparations for the new season are underway, and the team, which would like to try a new and different style, is in the process of “creative search.”

“We are skating the compulsory dances,” said Skoptcova, who switched to ice dance at age nine. “In our group, we have excellent experts (coaches)–Svetlana Lvovna (Alexeeva), Elena Kustarova, and Olga Riabinina–experts for skating skills.”

Skoptcova is happy about the Tango Romantica being the pattern dance for next season.

“The Tango suits us, and we’ve already worked on it,” she noted, referring to them having a Tango free dance in the 2017-18 season. “The Tango Romantica is a difficult dance, but it is beautiful and we enjoy working on it,” agreed Aleshin.

“I can say that we are looking for something new,” Aleshin said regarding the free dance, which is in the works. “Сertainly, we are working on new programs, but we are not announcing any details yet,” Skoptcova commented.

“For the free dance, we picked a theme and it will be very interesting,” added coach Olga Riabinina. “We also are working with new choreographers.”

At press time, the skaters had some time off. “I am right now preparing diligently for the final exams (at school) and for the entry exams for the institute (university) and Kirill is on vacation,” Skoptcova explained.

The Russian Junior Champions look up to all the top ice dance teams, but Aleshin feels especially inspired by three-time Olympic Champions Tessa Virtue and Scott Moir of Canada.

“I was very happy for Tessa and Scott,” he said. “I’m a fan of this couple. I believe that the Canadians contributed a lot to the development of ice dance. The way they performed their short dance and free dance at the Olympics was something unique. It was chemistry, it was like giving the life. They put everything out there.”

Aleshin also admires Sochi 2014 bronze medalists Elena Ilinykh and Nikita Katsalapov, citing that it was a shame they split up. He added in the six years they’ve been together, that the thought to part ways had never crossed his or Skoptcova’s mind.

Aleshin started as a single skater in the Siberian city of Omsk before moving to St. Petersburg. After Skoptcova contacted him through a Russian partner search, he moved to Moscow to train with her.

“In practice, it sometimes happens that we shout at each other, but that just happens in the work process,” Skoptcova shared.

“We have been skating together for a long time now and we understand each other without words,” her partner added.

The coaches are satisfied with their students and are very pleased and happy with how the team has progressed during the season.

“They have a strong technical base and a huge desire to develop it further,” Kustarova said. “Working with new choreographer Mikhail Kolegov, they are mastering new directions and styles of modern choreography and it works very well for them.”

Following their vacation, the skaters will attend training camps in June and July in Moscow before continuing their preparations for their first senior season. Competitions have not yet been confirmed, however, they hope to get picked up for two Grand Prix assignments and leave a strong impression in their senior debut.