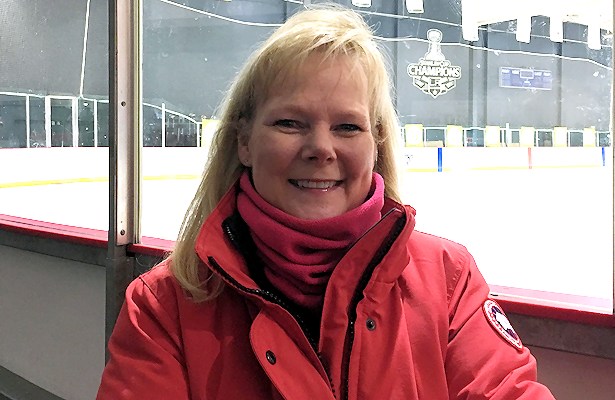 Tammy Gambill of Riverside, Calif., will relocate to Colorado Springs, Colo., on Jun 25, 2018.

On May 9, 2018, Olympic figure skating coach Tammy Gambill announced that she would be moving her training base from IceTown in Riverside, Calif., to the World Arena Ice Hall in Colorado Springs, Colo.

Gambill, who coached three athletes at the Olympic Winter Games PyeongChang 2018, has coached multiple international medalists in her coaching career. Among her many students are reigning U.S. medalists and 2018 U.S. Olympic Team members Karen Chen and Vincent Zhou.

“I want to be in an environment that includes all of the resources that the Olympic Training Center has to offer,” Gambill said. “I really enjoyed working with Christy [Krall] and Tom [Zakrajsek] this past season. I am excited about the energy at the World Arena Ice Hall and being around all of its coaches. After the Olympics, I was really motivated to take on this new challenge.”

“I’m really excited about Tammy coming to the World Arena!” said Zakrajsek. “We actually have gotten to know each other working on Vincent Zhou and certainly during the Olympic Games and the World Championships when we worked side by side. We kind of felt like we had a lot in common, so we’re really excited to have her coming to the World Arena. Obviously, the long term plan is to make this one of the best training centers in the world. Tammy brings a certain skill set that I think complements everybody that’s already on staff here.”

Gambill was first approached about a year and half ago by Mitch Moyer from US Figure Skating, followed by the manager of the rink.

“Both were very persuasive,” said Gambill. “The deciding factor was everything that Colorado Springs has to offer. They have the OTC, off ice training, physical therapists, plenty of ice time, and of course, the altitude!”

Several of the Gambill’s student’s will be relocating as well, including Vincent Zhou and Karen Chen.

“I think Tammy’s move to the Springs will balance my training and increase the amount of time I’m able to spend on my choreography and spins for a more complete program,” said Zhou.

“I’m so excited to try out training in Colo., especially since I’ve never trained in altitude before,” said Chen. “I understand it will be very different and new, but having changes and learning to adapt is part of this whole experience. I hope to continue to skate as long as I can while also starting to think about college and other things.”

“I will also be working with other skaters there,” shared Gambill. “I am excited to work with the other coaches and have them work with my skaters also.”

Gambill will remain the head coach of her current skaters, but plans to take advantage of the expertise the myriad of other coaches at the World Arena bring.

“I am looking forward to the energy and excitement of the arena,” she said. “I’m excited to be able to work with other top level coaches in the country. I feel that all of us together will make a great training base.”

The coach will definitely miss her rink in Riverside, Calif., where she has coached for the past twenty years. “They have been very generous with me and will always be a part of my family! They have always supported me and my skaters.”