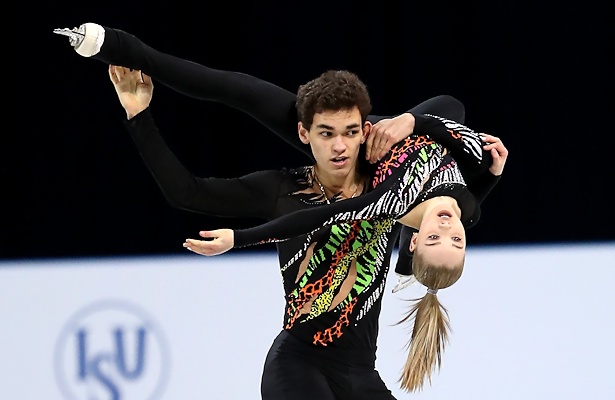 Competing in their first international junior season, Russia’s Polina Kostiukovich and Dmitri Ialin captured the silver medal at the 2018 ISU World Junior Figure Skating Championships last March. This young team drew attention, not only due to the technical difficulty they showed, which included a quad twist, but also for the originality of their programs.

The skaters from St. Petersburg, Russia, are now preparing for the upcoming season and are currently at a training camp in Sochi. Since Junior Worlds, Kostiukovich and Ialin and their head coach Vasili Velikov, who are supported by accomplished coaches Liudmila and Nikolai Velikov (Vasili’s grandparents), have been busy.

“We fixed our mistakes and prepared for the next season,” Kostiukovich said, regarding how they have improved. They mounted a new short program and reworked their free program to Cirque du Soleil’s “Xotica” that they wish to keep for the next season.

Ialin also had to take some time to study. “After Junior Worlds, our coach told me, ‘you have to rest mentally.’ He gave me two weeks to distract myself, but only after two weeks was I able to do that and then it was already time to go back. It was a bit tough, but basically everything is fine. We kept ourselves busy with new things and so it wasn’t boring,” he explained.

For the new short, the team picked “I’m a Survivor” from the Tomb Raider soundtrack. “We had a lot of problems with the music,” Kostiukovich recalled. “We started searching. We didn’t want something classical, but something unusual, modern. We’re in the 21st century after all.” The team, along with Vasili Velikov, suggested various pieces to each other and they agreed they would all have to like it.

In the end it was the coach, who came up with the music. “He switched it on,” Ialin said. “It is great music, we liked it right away. We asked, ‘how did you find it’? He sat at the computer until four in the morning and was looking for a suitable composition, clicked on that one and went to bed. We were all relieved. Finally, we had music.”

As with practically all skaters, finding the right music is not an easy task. “When you choose a music, you need to enjoy skating to it,” Kostiukovich pointed out. “If you don’t like the music, the whole program doesn’t work.”

“The right choice helps you to be successful,” Ialin agreed. “The judges are also human beings. They’ve been judging for a long time and they are tired of hearing always the same and when athletes are skating to that (same stuff all over), they can’t even watch anymore. Our coach also said, ‘you need to find something interesting. People are expecting to see something new from you. We need to surprise with something.'”

The World Junior silver medalists made some changes to their long program which include  a new cut of music and some animal sounds in the background. Now that they are happy with their choice, their focus is on looking for the right costumes to suit the music.

“Since the long program was cut short, we had to make some adjustments,” Ialin explained, referring to the fact that the Junior Pairs Free Skating will now be 3.30 instead of 4.00 minutes long. “We were skating 4.10 (minutes) and our coach even then said that we don’t have time for anything and now they cut the program even shorter. Eventually, we just decided to add some elements to the music. It’s not that much, but I think it will be interesting, and we reworked some transitions.”

The team created the new short themselves together with their coach in two weeks. The choreographer helped them with the arm movements, and the steps and transitions they did together.

“The kids are always suggesting something themselves,” offered coach Velikov. “Obviously, I’m suggesting something and maybe they don’t like it, but I’m not against (them contributing). I’m always ready to accept something new and different. The self-development is very important. If you don’t develop yourself, it will be harder in the future. They’re developing themselves and that’s great.”

While the team will start with the Junior Grand Prix at the beginning of the season, they are eager to test themselves at the senior level as well.

“We’d really like to start competing at the senior level and present ourselves. We don’t only want to do juniors, but want to do more,” Kostiukovich said.

Ialin sees a chance for them to break through in the next few years at the senior level. “I think that pair skating at the senior level (in Russia) is at the limit. I think that the junior level is stronger than the seniors right now. It’s more competitive and I think there are better prospects for the juniors, even though many people say that the juniors often split up when they are growing up. Plus, we don’t have so many (top) senior pairs left. It’s as our off-ice coach said – we need to break through in the next four years. There’s room, we can fight for it.”

The skaters and their coach also know what they need to do to achieve that goal. They’ve been working hard on their skating skills and presentation.

“It shouldn’t be just elements,” acknowledged Kostiukovich. “The main difference between juniors and seniors is the skating in general. You can see from a distance that a pair has been skating for a long time, but the juniors obviously look like kids. It’s like adults and little children. They are different from each other in their behavior, in everything. We can’t look like children anymore. We need to grow.”

“Everything (in the senior programs) is very balanced, especially when a pair skates as one, that’s just beautiful,” added Ialin. “But the juniors, they’re moving from one element to the next and you don’t see so much character and presentation. So, we’ll have to grow in that aspect.”

They are also looking at the technical aspect of their skating. “We want everything to be polished that the judges with the new system of minus five to plus five have no reason to nag,” Velikov said. “We have to work on cleanliness. I won’t take out any difficult elements. We’ll do the quad twist, but we’ll work on it so it will be absolutely neat and nobody can pick on it.”

So far, Velikov, who is only 24 years old himself and competed in singles and pairs before turning to coaching, is happy with the progress of his pair. “Their progress is huge for the time they’ve been skating together. That’s two seasons. They made a lot of progress and this (past) season they had very good results. They are very hard-working, creative kids. They’re always moving forward and looking for something new. They don’t stagnate.”

The team has also been working on a new and interesting lift. “We have to surprise with something. Pair skating is not just a sport, it’s like a show,” Kostiukovich noted. The single skaters have multi-rotational jumps, but they don’t do twists and lifts and we need to impress people with something.

Following their training camp in Sochi, the skaters will return to St. Petersburg for three weeks before going to another training camp in Sweden. Then they plan to attend the test skates for the Russian junior team in Novogorsk near Moscow. They don’t know yet which Junior Grand Prix they will attend, but their plans are obvious: “We want to do two (Junior) Grand Prix events, qualify for the Final and get to Russian senior Nationals,” Velikov said. “My job is to get them into the national (senior) team. I think this is realistic with their potential.”

The skaters are focused on making further progress. “I think the most important thing is to keep at least our level from the last season or to reach the next level,” Ialin noted. “We don’t want to regress, that’s the most important. We shouldn’t stagnate, but move forward, with each day,” Kostiukovich concluded.