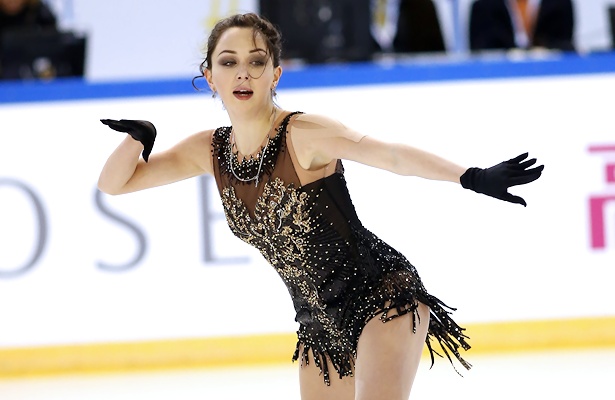 2015 World and European Champion Elizaveta (Lisa) Tuktamysheva has not made the Russian figure skating team for Worlds in the past three years due to an extremely deep field in the ladies’ discipline. The 21-year-old is not ready to give up, however, and is working on the triple Axel as well as improving her artistry. The skater, who currently trains under coaches Alexei Mishin and Tatiana Prokofieva in St. Petersburg, attended a training camp in Tartu, Estonia, in May. She then went to Kislovodsk (North Russian Caucasus region), for athletic training in in June.

“I was not disappointed with my performance,” she said about Russian Nationals where she had placed seventh, which resulted in a ‘finished’ season. Basically, it was one of the most successful performances of the season. I made few mistakes, but in order to finish higher, I would have needed to skate perfectly.”

Skating perfectly and achieving better results is what Tuktamysheva is aiming for in the upcoming 2018-19 season. With her season ending in December 2017, the 2014-15 ISU Grand Prix Final Champion got an early start on her preparations.

“My programs are ready and almost finalized and we started earlier learning new jump combinations and elements,” she said. At the training camp in Tartu last month, Tuktamysheva felt she was in better shape than in previous years at this time. She was working on the triple Axel – posting a video of a nice one she landed – plus a triple Lutz-triple toe.

“Another important aspect is that I didn’t have to heal injuries at the end of the season,” she explained. “I kept myself in good tone. I was physically well-prepared and didn’t have any problems.”

Tuktamysheva debuted her new short program to “Assassin’s Tango” by John Powell at a small show during the training camp in Estonia.

“I liked this music for a long time, but for some reason, thought that it was overused,” she shared. “But when I analyzed it, I realized that right now only a few people are taking it, and I thought, ‘why not?’ We worked with modern choreography and a good ballet master, similar to the (style of) Eifman (a modern ballet choreographer from St. Petersburg) ballet. I really liked that. It opens new possibilities on the ice.”

“I think this program is one of the best that I’ve done,” the athlete elaborated. “It is really something new, not a classical Tango. There are almost no Tango moves, so it does not show the dance Tango, but just the emotions and the relationship between man and woman.”

For the free skate, Tuktamysheva and her team selected fun and upbeat music to “You Don’t Love Me” by Caro Emerald and “Petite Fleur” by The Hot Sardines.

“It is a very playful program,” the 2015 World Champion share. “Finally, something that I wanted for a long time and I didn’t have that kind of program yet. I wanted something light-hearted just to have fun.”

“Unfortunately, it is a hard program so that for now I’m getting tired doing it and it’s not so much fun,” she joked.

The skater plans to include the triple Axel in her programs and the triple Lutz-triple toe at least in the free skate. However, the focus for her is not only on the jumps.

“Of course, I want to show more consistent skating in the upcoming season, but nevertheless, I want to change myself a bit,” she offered. “Not only to set priority on the jumps, but to show two absolutely different, absolutely distinct programs.”

Obviously, Tuktamysheva is well aware of the tough competition inside Russia. She understands it will be very hard to make it to the ISU Championship events. Regardless, she has no intentions to retire at the moment.

“I feel strength inside,” she said. “I feel the desire, the urge to skate and just to move that sport, figure skating, forward, not as a tough sport with a strong competition, but as art, as a sport that gives you inspiration. I want to set the goal for me that not only competitiveness can lead to success and victories in figure skating, but also skating with your soul and skating for the audience. So that not only the coach enjoys it, but also the judges and the spectators enjoy it.”

Tuktamysheva hopes to inspire the next generation of young skaters as well, and to prove that one can have success without constant pressure.

“Nobody stopped me from winning Worlds and Europeans without competition in the training group, without toughness and bitchiness,” the 21-year-old said. “I just had fun. And you can win with that and you can skate for a very long time like that, I believe, like Carolina (Kostner). Carolina is a very important example for that and I want that not only that Carolina and myself are there, but that the sport develops in a good direction.”

Tuktamysheva continues her preparation for the season in training camps in Courchevel, France, and again in Tartu, Estonia, this summer and then in St. Petersburg at her home rink. She would like to attend Nebelhorn Trophy in Oberstdorf, Germany, and Finlandia Trophy in Espoo as her Challenger events to start off the season and then hopes to be selected for two Grand Prix events.