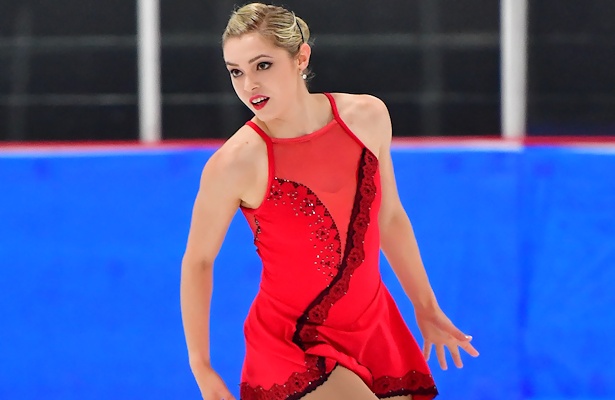 Alaine Charatrand of Canada is slated to compete at the 2018 Quebec Summer Championships next week.

After a disappointing Olympic season, 2016 Canadian Champion Alaine Chartrand is looking for a clean slate and has made some changes for the upcoming 2018-19 season. The skater, who medaled at Canadian nationals the previous three seasons, missed the mark last season and was left off the Olympic team.

“Last season, there were a lot of unfortunate things that happened prior to some competitions which was really frustrating,” recalled the 22-year-old. “I was sick at my first competition of the season at Autumn Classic. Two years in a row, I sprained my ankle the week leading up to nationals. That was really difficult to have to go through, especially given the high-pressure situation. Also, I never got a solid combo in my short program except for the Four Continents.”

Chartrand took some time to work with Christy Krall in Colorado Springs, training three hours a day on the ice, doing back-to-back long programs, as well as off ice training.

“She brought in a lot of other people as well,” said the skater of Krall. “I also worked with Ben Agosto, Christopher Dean, and lots of other great people who helped me out last season. In a lot of ways, I felt stronger after training in Colorado Springs, especially given the altitude.”

However, it wasn’t translating to the ice during competitions. After the 2018 Four Continents, where she finished eighth, Chartrand went to Hawaii for vacation.

“I never took time off in the past before, except for a few days,” said the athlete. “I’ve never gone anywhere for vacation before. I went to Maui and it was amazing! It was definitely what I needed at that point.”

After she returned, Chartrand continued light training by herself.

“I had a few shows to do,” she said. “I was only skating a few days a week an hour a day. I was really considering my options at that time while trying to keep an open mind and see what would be best for me moving forward.”

For several months, the skater was in complete limbo.

“It was scary,” admitted Chartrand. “I was really, really unsure of what direction I wanted to take. I wasn’t even sure if I was going to continue skating. I thought I was going to be done. I knew I really wanted to start my post-secondary education, that was first priority, and I wasn’t sure how skating would fit into that.”

The skater applied to several universities, including York and Burnaby, while she researched the programs for a degree in Kinesiology. In the future, Chartrand would like to work with athletes in terms of training or physiotherapy.

“At the end of June, I accepted my offer to York University,” she said. “It was so hard to decide, but it came down to the program as well as funds. It was then that I decided to commit to train at YRSA with Tracey (Wainman) and Gregor (Filipowski). If I was going to continue skating, I wanted everything to be new so I could put last season behind me. I wanted everything to be fresh. New short program, new location, new coaching situation.”

“Michelle (Leigh) has done so much for me over the years,” said Chartrand, regarding her time with her former coach. “It’s been a really long relationship. She took me through my international career from my first Junior Grand Prix in 2012 and was with me for every senior national championship. We had lots of successes together including a Grand Prix bronze  in 2014, a silver at 2016 Autumn Classic, and four national medals, including my gold in 2016. She understood I was struggling in my decisions about my future.”

Chartrand now lives in Toronto full time. “I’ve been really close to my family and this is the first time that I’m living away from home on my own. I now live with a skating family. That in itself is new for me.”

The skater feels confident about the decisions she has made and feels it’s good to have another focus.

“After high school, I was singularly focused on skating for the next four years,” she pointed out. “I don’t think that was always healthy for me. I think I really needed to have something else in my life to take the focus away from skating when I needed it. I need the balance.”

Currently, Chartrand is scheduled to compete at 2018 Quebec Summer Skate next month where she plans to unveil her new Short Program which was choreographed by David Wilson. The music is to Ramin Djawadi’s “Paint It, Black” from the Westworld TV series (Season 1).

“It was a very different version that I have never heard before,” said Chartrand, adding that she had not yet watched the series while clarifying that there are two versions for each season. “I’m not really good at looking for music and Tracey found this piece. I like it because it’s unique and hasn’t been done before. Both Tracey and Grzegorz thought it was perfect and they were enthusiastic about it, and I fully trust them.”

Chartrand admits the piece is dark and feels like it reflects what last season was like for her. “I guess you could say I’m trying to break out of that darkness and bring the color back into my skating.”

The skater will be keeping her long program to Sunset Boulevard from last year, choreographed by David Wilson, as she feels it hasn’t reached its full potential yet. It’s currently being modified to accommodate the new ISU rule.

“I think a well-balanced routine with the jumps more spread out allows for a better program,” noted Chartrand. “I think it might be easier for choreographers too. I know David is happy about the changes. The rest is in the judges’ hands.”

For this season, her goal is simple: She wants to enjoy herself on the ice.

“I feel likes it’s not been like that in the recent past which has been frustrating,” explained Chartrand. “When there’s no pressure, I can really enjoy myself on the ice and the freedom of it. The height in the air, the speed…all the simple things that made me fall in love with skating in the first place. I hope that the new-found joy will translate into more enjoyable performances for the audience, as well. I want to do this season for me.”

Chartrand is hoping for a Challenger event, but is currently scheduled to compete at Skate Canada later this fall.