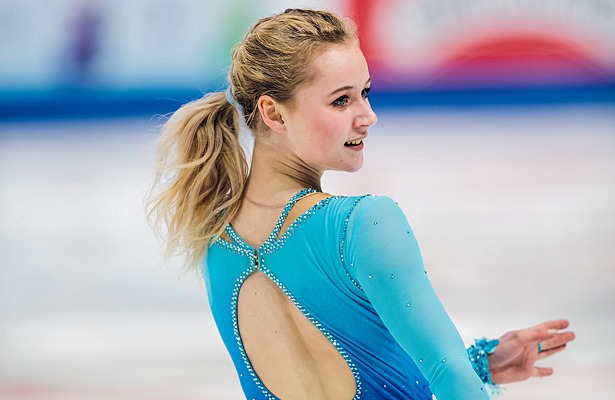 A few months ago, Russian figure skater Serafima Sakhanovich was ready to quit the sport at age 17. Although she had skated well during the season, at the end of the year, everything seemed to crumble. The teen suffered from an injury, had problems with the landlord of the room she rented in Moscow, and her coach in her club had left.

“We rented a room, that was the only thing we could afford financially,” the two-time World Junior silver medalist explained. “I had an injury, but I just couldn’t stay there and have my parents pay for the room and not even skate. This is a kind of injury that gets worse every two years during the winter. The ligaments are inflamed in the foot, but then it goes away. It’s terribly painful and I can’t skate at all or only in pain.”

“Mentally, it is really tough when everything doesn’t work in your favor,” she added. “Then my coach, Julia Lavrenchuk, wasn’t working there (at Evgeni Plushenko’s skating school) anymore and that was hard for me, too. I felt empty inside when I came back, and I didn’t want to do anything.”

However, once Sakhanovich returned home to St. Petersburg, she started to feel better again. In addition, her mother, a big skating fan who used to skate herself in her youth, told her daughter what was going on in the skating world with hopes to get her interested again.

It was during the Ladies final at the Olympic Games that Sakhanovich made the decision to give it another shot. She got in touch with Evgenia Medvedeva, with whom she was very close during their junior days.

“Zhenia (Evgenia) really motivated me,” said the skater, who turned 18 in February. “I got motivated, because I watched her (Medvedeva) and I saw how hard it is for her and that she managed. I was happy for her to see how she was able to overcome herself, because she skated very well in the free.”

Sakhanovich was also impressed by the men, especially by Deniss Vasilijevs of Latvia. She didn’t watch the Olympic Games on TV, but she followed the results and sent Medvedeva a message, congratulating her and the two renewed their contact.

Sakhanovich was ready for a fresh start and she needed a coach. Since she knew that Anastasia Gubanova had left for Moscow, she contacted her coach Angelina Turenko.

“We started to work rather quickly, and I happily agreed,” said Turenko, who competed at World Juniors in 2004 before her career was cut short by an injury two years later. “I really enjoy working with Sima (Serafima). For me it is important to find an individual approach for each athlete, even if there are several ones in the group. It’s an individual sport and you need an individual approach.”

Together, with former ISU Junior Grand Prix Finalist Elizaveta Nugumanova, Sakhanovich is now the top skater in Turenko’s group. The coach is not deterred by the fact that her new student has switched coaches several times in the past few years.

“You should not be afraid of that, you just need to do your job,” said Turenko. “We work with a system and we have a big team and I hope that Sima likes this way of working. I just enjoy working with her and I discovered that Sima is a very hard-working athlete and sometimes you even have to stop her, quite often actually.”

“Her potential is huge,” the coach continued. “She is an athlete that is motivating others. The past few months went really well. First we got to know each other and then we did a lot of work together. It’s good we had that time to get used to each other.”

Sakhanovich, who was one of the prodigies in Russia when she finished fourth at senior Nationals at age 12 in December 2013, feels that she is growing more confident again.

“I got my confidence back and I realized how to pace myself at competitions and in practice,” said Sakhanovich, who came fifth at 2017 Skate America where she was coached by Evgeni Plushenko. “Before, I didn’t understand why I was all over the place in competition, but in the last season with each competition, everything became clearer and I felt my legs and my body.”

“I wasn’t thinking like ‘what if it doesn’t work,'” she continued. “Now, I was thinking ‘why wouldn’t I do it?’ I’ll do it for sure. I can skate my program in practice, why shouldn’t I be able to skate it in competition?’ The only difference is that there is an audience and the audience is helping.”

For the upcoming season, Turenko and Sakhanovich decided to keep her short program to “And the Waltz Goes On” by Anthony Hopkins.

“When I saw the short program in the season, I really liked it,” said the coach. “Since she skated it only for one season we decided to keep it. Obviously, we polished it and made some adjustments.”

The new free program is set to a Tango Medley with “Oblivion” in the middle and an upbeat Tango piece at the beginning and the end. Turenko suggested the music. “I hope that the program turns out very well. It is working well already (in practice), and in competition with the elements and costumes, it will be a real senior program.”

There are no more thoughts of retiring for Sakhanovich now.

“I realized that I still can do a lot,” she noted. “I am not looking at placements or points. For me, the most important thing is that people will remember me. (My goal is) to have good programs, skate well, and to show well executed elements, the take off and the landing, the emotions, everything together. It’s really nice when people tell you ‘you’re skating beautifully.’ For that alone, it is worth doing all that. I am striving for the ideal performance of my programs.”

After her vacation, Sakhanovich came back to training in the beginning of June and has practiced at home in St. Petersburg and at a training camp in Italy. The training camp in Courchevel, France, will start next week. The skater does not know yet which international competitions she will attend but hopes to go to two Challenger events like she did last year when she came in second in Minsk and first in Warsaw.