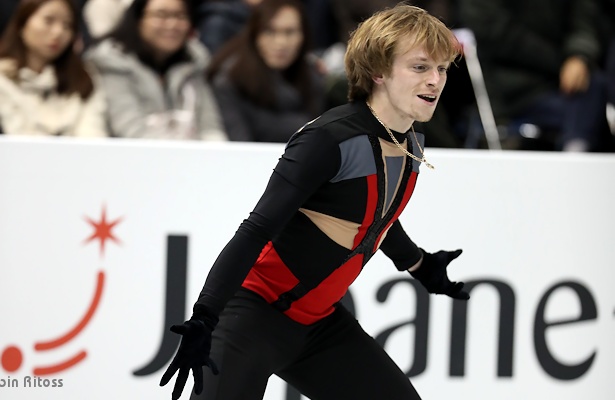 A few people were probably surprised to see the name of Russia’s Sergei Voronov on the Grand Prix lists for this upcoming 2018-19 season. They might not have expected the 30-year-old skater to continue his career, especially since he came in fourth at nationals last December and did not qualify for the Olympic Games. However, Voronov has decided to continue to do what he loves – training and competing.

“I had time to think,” he said. “I act on my inner state, on what I want and not on the advice of others on what I need or what I don’t need. I am glad that I had the opportunity to make my choice myself and I chose that I still want to skate.”

Voronov had to deal with a coaching change since Inna Goncharenko, his coach of the past two years, left the CSKA Moscow club. He decided to stay in the club and now trains in the group of Elena Buianova.

“I am happy that I remained in CSKA and I am grateful to Elena Germanovna (Buianova) that she allowed me to train with her team,” said the skater from Moscow. “The conditions are great. She tells me a lot of things and gives me valuable advice for my skating and for my work overall. She corrects me. It would be a sin to complain, honestly. The work with her impresses me. It is nice and I really enjoy it.”

The ISU Grand Prix Finalist of the past season also looked for new choreographers to mount his programs, and at the end of May, went to Kazakhstan to work with Denis Ten.

“This was a spontaneous decision,” recalled Voronov. “I had to mount a free program and I was looking for something new and different. I was just going through Instagram and I saw often the stories that Denis published. And then I just thought, ‘Why not write to Denis?'”

He got into touch with Ten, who was surprised that Voronov asked him to help him with the program. “He said, ‘I can mess up everything’ to which I said openly and without any doubt, ‘No, Denis, you are not messing up’. I did not sweet-talk. I was very convinced of Denis.”

Voronov already had a piece of music in mind when the travelled to Kazakhstan, but Ten suggested that he use “Way Down We Go” by Kaleo.

“I suggested another option, but he convinced me and I am grateful, again, and to my deep regret I cannot write to him now or call him and tell him, ‘Denis, you were right,'” said Voronov. “We had an interesting, creative discussion. I gave in and now I understand how right that was. He did the music. Everything was done to his taste. I couldn’t dream of anyone better to have done my program.”

Obviously, after the tragic death of Denis Ten on July 19, this program has special meaning.

“Honestly, now, when I am skating this program, there are a lot of thoughts,” Voronov explained. “First of all, the music — there are some certain lyrics, when you understand them, (you realize) there is some kind of fate in life. I am just thankful to fate that it brought me to Denis and that I had the chance to work with him.”

Voronov is apparently the only top-level skater Ten choreographed a program for. “Unfortunately, he only was able to do it for me,” the two-time Russian Champion pointed out.

“Probably, what I want most of all, is that the figure skating world, and not only the figure skating world, but wherever I perform, can see how talented and versatile Denis was,” he continued. “He was not only a well-known and successful athlete, but also a choreographer. He was a person with taste and his own qualities, with a highly developed intellect, which is, believe me, not unimportant in our sport. I think, and again I’m not flattering, I looked up to him and now I’m watching his performances often, because there is a lot to learn from him.”

The new short program is set to “Appassionata” by Secret Garden and it was Voronov’s choice. The program was choreographed by Artur Gachinski. Maxim Zavozin also worked on it, polishing it up.

Voronov’s summer was busy with preparations for the season. After getting the programs done and taking his vacation in Greece, the 2017 NHK Trophy Champion went to Courmayeur, Italy, for a training camp.

“I fell in love with this place that I’d like to spend part of my life there, from 60 to 70,” he joked. “The summer was productive. I’ve been working on everything – on the programs, the skating skills, the spins, the jumps. Each season is going through everything from the beginning to the end, just with new music and maybe other thoughts in mind.”

At the end of July, the Russian skater went to a show in Japan which he enjoyed very much. “It can’t be bad in Japan – I am received so warmly in no other country. So familiar are these cities Osaka, Kyoto, and these people. It is so nice and a huge experience,” Voronov said. He enjoyed spending time with other skaters such as Nathan Chen, ice dancers Gabriella Papadakis and Guillaume Cizeron, as well as with fellow Russian skaters Alina Zagitova and Dmitri Aliev.

“It can’t be bad in Japan – I am received so warmly in no other country.”

Voronov is now preparing for the test skates of the Russian National team this upcoming week in Moscow, where he will present his new programs first to Federation officials and to the public on September 9.

The Muscovite is scheduled for the Grand Prix events Skate America and NHK Trophy and also plans to compete at 2018 Ondrej Nepela Trophy as well as a national Russian Cup series event.