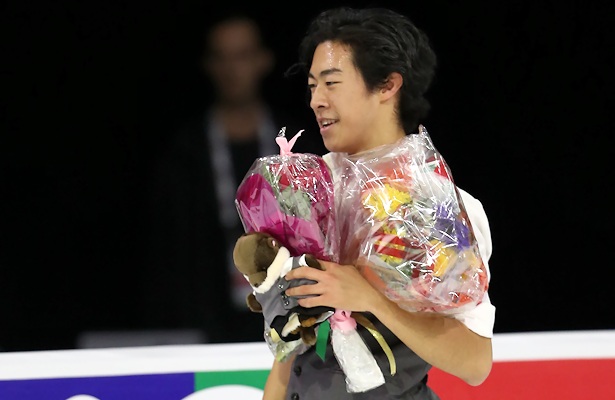 USA’s Nathan Chen leads the Men after the Short Program at 2018 Skate America.

Chen delivered a confident routine to “Caravan” by Duke Ellington which featured a solid triple Axel and triple Lutz-triple toe, but the tech panel called his quad flip underrotated. The U.S. Champion showed strong spins and footwork and earned 90.58 points for a first-place finish.

“It was a good start for my season and for my first short program of the season since being at Worlds last year,” said the 19-year-old. “It definitely wasn’t the best in terms of all the technical elements, but the performance was pretty good. The audience was amazing and I had a lot to go off of.”

The two-time and reigning U.S. national champion feels quads are very important and plans to keep implementing and working on them.

“I definitely get the most enjoyment out of doing quads, even just in practice, so that’s still something I want to bring to the table in competition,” said Chen. “But of course, there’s pros and cons to them. I’m putting a lot of emphasis on spins and choreography this season and it’s something I will definitely keep trying to improve on.”

Brezina skated a passionate routine to “Who Wants to Live Forever” by Queen, showing good knees and edges and landing a solid quad Salchow-triple toe. The 28-year-old popped a flip but held onto a triple Axel and showed good level four spins to finish in second with 82.09 points.

“I started in Salt Lake City (as the first competition),” Brezina, who took the silver at this event earlier in mid-September. “It was a bit of a step up for me, except for that beautiful single flip. Other than that, I felt pretty good. It was better than what I’ve been used to from the previous years.”

In his first Grand Prix, despite competing at Worlds three times, Yee finished in third place (81.52) with his relaxed and flowing routine to “To Build A Home” by the Cinematic Orchestra. The skater showed good flow in his solo quad Salchow and delivered a solid triple Axel, but there was an edge call on his triple flip (in combination with a triple toe). All spins received a level 4.

“For me, I’m lucky to be invited to the Grand Prix for the first time and having the short program of my life in my first Grand Prix is really great,” said the 21-year-old. “It’s very unexpected, that’s for sure. Hopefully I’ll do just as well in the free.”

Sergei Voronov of Russia landed a quad Salchow-double toe, but two-footed the landing of triple Axel. Nevertheless, the spins were all graded a level 4 and the veteran skater finished in fourth with 78.18 points.