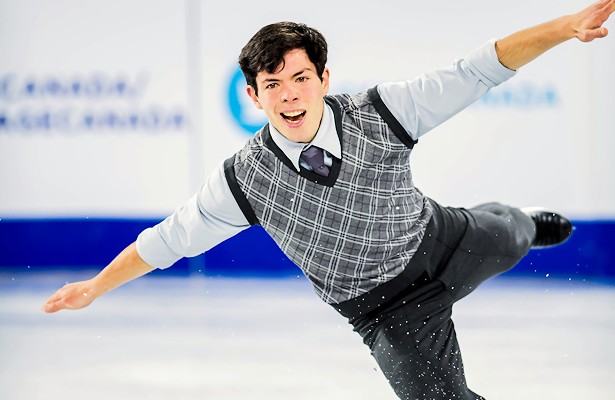 Canada’s Keegan Messing took the lead in the Men’s Short Program at Skate Canada, followed by Shoma Uno of Japan and South Korea’s Junhwan Cha in Laval, QC, this afternoon.

A jubilant Messing danced and bounced his way across the ice to “You’ve got a Friend in Me,” showing a confident quadruple toe loop-triple toe loop combination, triple Axel and triple Lutz. The 2018 Canadian national silver medalist earned 95.05 points for his joyful effort and the fans in Laval, Quebec gave the 2018 Olympian a standing ovation upon the end of his program.

“I think this is my first standing ‘O’ for a grand prix, so it feels pretty nice,” he exclaimed. “I’m very happy with the score. It’s a great spot for the first grand prix and now I can set goals higher for the next stops.”

“It’s one step at a time right now and I’m focused on skating and see where it takes me,” Messing said, in regards to his readiness to be Canada’s leading man. “If it takes me to the top, I will grasp it with two hands and smile while doing it.”

“Every step is a blast and I can’t wait to continue to improve and keep it fun,” said Messing of the animated program. “It’s so much more rewarding when you have fun.”

2018 Olympic silver medalist Uno landed a strong quadruple flip, but then botched the landing of his quadruple toe loop-triple toe loop combination and took a dramatic fall on his triple Axel to finish second with an uncharacteristically-low score of 88.87. The smooth routine, set to an acoustic version of “Stairway to Heaven,” was bolstered by the strongest program components scores of the night.

“I was concentrating on the two quads too much and lost focus on the triple Axel,” Uno said through an interpreter. “I usually don’t make mistakes like that and in the free program I need to be careful not to repeat those mistakes.”

Cha skated his short program to music from “Cinderella” and mesmerized spectators with his sweeping moves. His routine featured a quadruple Salchow, triple Lutz-triple loop combination and triple Axel. The 2018 Olympian received level fours on both his spins and earned a total of 88.86 points.

As much as Cha was pleased with the jumps, he is especially focused on the program.

“I am working on the programs to get better performance because it’s the beginning of the season,” said the 17-year-old. “[I want to] make sure it’s better choreography. I really like the music and the musical changes.”

“My goal is to make sure I have good health and not injury,” the two-time South Korean national champion said, looking towards the full season.

Russian Alexander Samarin was fourth with 88.06 points and Israeli Daniel Samohin finished fifth with a score of 84.90.