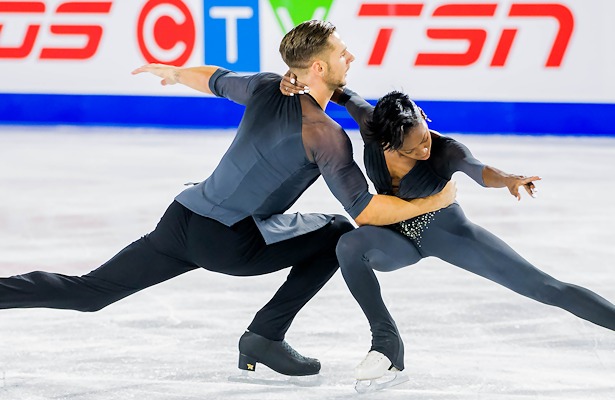 France’s Vanessa James and Morgan Cipres easily won gold with more than 20 points to spare at 2018 Skate Canada on Saturday afternoon, picking up their fifth Grand Prix medal of their career. Cheng Peng and Yang Jin of China squeaked out the silver medal over Canadians Kirsten Moore-Towers and Michael Marinaro.

Skating to “Wicked Game” and dressed in cool grey costumes, James and Cipres were the class of the field, opening with a glorious throw triple twist followed by side-by-side triple toe loop-double toe loop-double toe loop combinations and side-by-side triple Salchows. The veterans also securely landed a throw triple Lutz and throw triple Salchow. Throughout the program, their expression captured every chord of the melancholy lyrics, and in the final moments of the routine, a proud Cipres broke from choreography in celebration of the clean performance.

“That is the best free skate ever!” James exclaimed. “We have been skating close to it in practice so that’s why we were so confident. We gave so much emotion, and at the end, it was just magic for us. It is going to be hard to beat now. I’m kind of nervous actually.”

“We were a little tight,” admitted Jin regarding the size of the ice surface in Laval.

“We hope for clean jumping,” he added regarding their goals for NHK Japan.

Moore-Towers and Marinaro dazzled with their clean Pink Floyd routine that included determined side-by-side double-Axel-triple Salchow sequences and a secure throw triple loop with a sharp landing. The team also managed impressive lifts with varying positions and free-spirited choreography. Moore-Towers danced in delight at the conclusion of the program as a standing ovation unfolded for the 2018 Canadian national bronze medalists.

“We were super thrilled with our skate today and very excited after the performance,” said Moore-Towers. “We were both a little nervous today, me especially. It’s hard to lose the silver medal on a fraction of a point.”

“We just knew we were capable of laying down a good performance and have a good result, so we wanted to make sure that happened,” added Marinaro.

Russians Aleksandra Boikova and Dmitrii Kozlovskii enchanted the audience with their “Nutracker” routine to finish in fourth with 196.54 points and made a statement of their talent. Their clean program, featuring side-by-side triple toe loops and a secure throw triple flip, was particularly enhanced with their balletic lines and her flexibility.

“We are feeling great because we did our job really well,” said Boikova, “and I think judges saw it.”