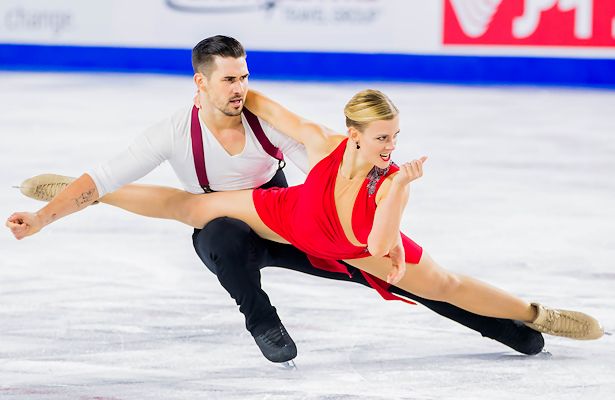 USA’s Madison Hubbell and Zachary Donohue  took the lead in Ice Dance after the Rhythm Dance at 2018 Skate Canada, followed by Victoria Sinitsina and Nikita Katsalapov of Russia and Spain’s Olivia Smart and Adria Diaz.

One week following their first grand prix victory at Skate America, Hubbell and Donohue are poised to repeat by finishing first in the rhythm dance with their seductive tango to “Alavare” and “Tangata del Alba.” The Americans handily won this portion of the competition with a score of 80.49 after putting out solid level 4 twizzles and earning high grades of execution (GOE) on all elements.

“We didn’t want to be in our heads trying to get the technical,” said Hubbell, keen to improve on the team’s scores from Skate America. “I think we were able to stay connected between the two of us. Obviously, the end went better,” she joked, referring to the team’s final pose stumble in Washington.

“We had a very strong performance,” she added. “We are happy with it for October and we are happy to have this next month to keep improving.

“We have our work cut out and we know exactly what is has to be, so it gives us confidence moving forward,” added Donohue.

Sinitsina and Katsalapov’s dramatic and intense rhythm dance, set to a more traditional tango background of “Verano Porteno,” pleased the judges who awarded the team with a score of 74.66.

“Work continues all the time,” said Katsalapov of the team’s training despite recent injuries. “We have new beautiful programs. We love tango.”

“One little mistake on the twizzles, but everything went really good,” he said about the program.

Smart and Diaz were overjoyed with a third-place finish thanks to a score of 72.35. The Spanish national champions skated to “A Evaristo Carriego.”

“I am very pleased,” said Smart. “As soon as we finished, we knew we had nailed that program here at Skate Canada. We skated as one. We really stayed together and focused on each other. We nailed all our elements and put out a good performance for the crowd. We know we can do better on the technical score, but it’s a work in progress.”

“It went really good,” Diaz said of the performance. “We are happy how we managed the pressure, the fact that it’s the first grand prix of the season, being at home too, a lot of people cheering. We had fun. I really enjoy skating to tango, so it’s a fun program to do.”

France’s Marie-Jade Lauriault and Romain Le Gac  finished fourth with 68.90 points and China’s Shiyue Wang and Xinyu Liu are fifth with a score of 66.96.

Considered contenders, Marie-Jade Lauriault and Romain Le Gac are in sixth place with a score of 66.95 after an uncharacteristic fall, a mere tenth of a point behind the Chinese.