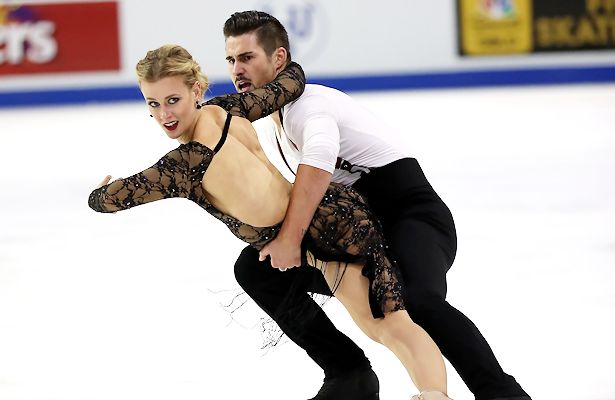 “It was great for Zach and I to be back in the states competing,” Hubbell said. “It’s been awhile since we have been able to skate here at Skate America. Overall, we were happy with the day. I got a little bit overly passionate and fell on top of Zach at the end, but we are happy and looking forward to tomorrow.”

“Everything is a learning experience. Obviously, it’s not an ideal short dance, but we take a lot of knowledge and learning moving forward. I learned how flexible I am, not as much as I thought,” Donohue joked.

Guignard and Fabbri displayed innovated entrances into their elements in their difficult routine, also earning a level 4 on the twizzles and a stationary lift. Their diagonal steps were graded a level 2 and the 2018 Lombardia Trophy champions earned 75.01 points.

“We were feeling very good when we stepped on the ice, then unfortunately we had a couple of really small mistakes, so we are not a 100 per cent happy with our performance,” Fabbri said. “We can perform better, but it’s the first major event of the season and it was a good starting point.”

Zagorski and Guerreiro displayed control and good attitude in their dance as well as intricacy in their transitions. The 2018 Olympians also showed strength in their changes of position, earning a level four on the twizzles and straight-line lift, and a level 3 on their mid-line steps. They finished in third with 73.30 points.

“Today was our first competition of the season, so of course it was our first time presenting our program,” Zagorski said. “We are more or less happy with how we performed today. Of course, there are a lot of things to work on and to improve, but overall, we’re pretty happy with what we put out on the ice today.”

USA’s Lorraine McNamara and Quinn Carpenter who are skating in their 14th season together, showed prowess in their tango. They were the only team to earn a level 4 on their patterns, meeting all key points. The 2018 Ondrej Nepela Trophy silver medalists also earned a level 4 on the twizzles and rotational lift. They are in fourth place with 72.44.