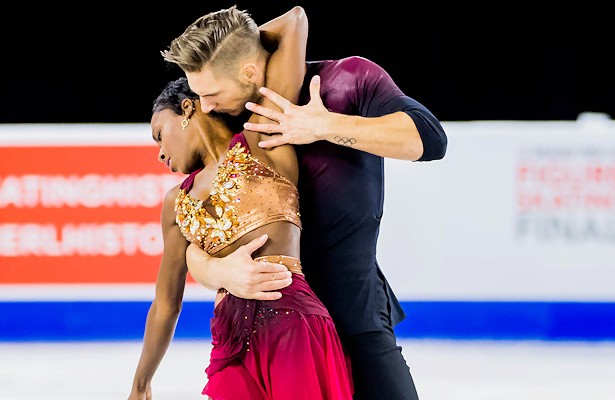 The Pairs kicked off the second event of the 2018-19 Grand Prix series at Skate Canada on Friday afternoon. France’s Vanessa James and Morgan Cipres are currently in first, followed by Cheng Peng and Yang Jin of China and Canadians Kirsten Moore-Towers and Michael Marinaro.

“It was a little tighter everywhere,” James admitted, referring to the smaller ice surface which required the team to adjust their patterns. “I think the feeling was better in the beginning [of the program] anyways, but overall, we are good.”

“I’m really happy to see that at the beginning of the season, because it will be tough at the end – everybody is going to be in shape and sharp,” Cipres said, proud of their improved levels. “For me, the level here today was much better than Skate America I think, and that’s good for us. When there is a big competition at the end of the season, it is going to a big fight at worlds, so we do not want to sleep and just skate. We have to skate better and better and better and so I am happy about today even with the mistakes and I think it was a good beginning.”

Peng and Jin impressed the fans and judges with their modern “Ophelia” short program to finish second with a score of 72.00. Side-by-side triple toe loops opened the program which also featured a soaring throw triple twist and throw triple loop. The team’s lift, spin, death spiral and step sequence were all graded level four.

The team of only three years is the only duo representing Chinese pairs.

“We just feel and are just thinking to do our best, is our job,” said Jin of the pressure. “We love this program so much,” he added about the routine choreographed by Lori Nichol.

Moore-Towers and Marinaro skated through visible nerves to cleanly execute their high-risk elements in their short program set to “The First time Ever I Saw Your Face.” A quick throw triple twist was followed by side-by-side triple toe loops and later a throw triple loop. The two-time Canadian national bronze medalists earned 71.26 points.

“We are about a six- or seven-point increase from about two weeks [at the 2018 Finlandia Trophy] ago, so we are definitely happy with that,” said an elated Marinaro. “And I think the best short program score of our career actually.”

The team is adapting to being the Canadian front runners upon the retirement of Meagan Duhamel and Eric Radford and the split of Julianne Seguin and Charlie Bilodeau.

“It’s weird,” said Moore-Towers. “It’s a position that I’ve not been in before and neither has Mike. So we had to kind of adjust our mindset a little bit this summer.”

“It’s definitely a huge opportunity for us and we are definitely trying to step up and seize the moment,” added Marinaro.

The Russian team of Aleksandra Boikova and Dmitrii Kozlovskii was fourth with a score of 64.57, followed by Australia’s Ekaterina Alexandrovskaya and Harley Windsor.