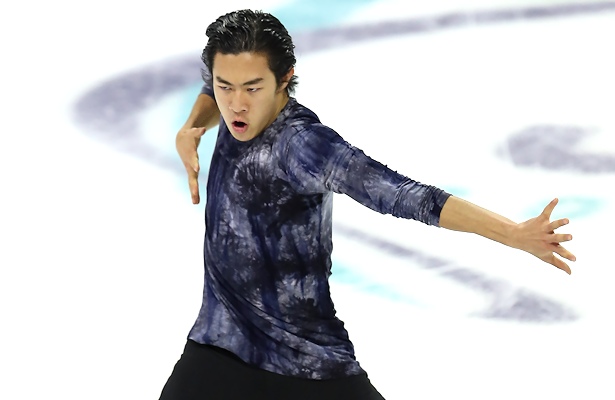 The Men’s figure skating event at 2018 Skate America concluded with the Free Skate on Saturday afternoon in Everett, Wash. USA’s Nathan Chen maintained his lead with over 40 points to spare to win the gold. Michal Brezina of the Czech Republic maintained second for a silver medal while Russia’s Sergei Voronov pulled up from fourth to capture the bronze.

Chen unloaded three quads in his routine to “Land of All” by Woodkid, including a quad Lutz. The 2018 World champion got an edge call on a triple flip in combination with a triple toe, but otherwise landed five other triples and showed good spins to earn 189.99 points in the free skate. With a total score of 280.57, the headliner distanced himself from the rest of the pack by over 40 points to take the gold.

“I’m happy with today’s skate,” said the reigning Grand Prix Final champion. “Definitely a lot of improvement from my last competition and that’s really my goal throughout the season. Just keep on improving from competition to competition.”

“In terms of the number of quads, the program was definitely watered down,” Chen added, “but I think that in terms of where I am at in the season right now, it’s definitely perfect. I’m looking to add more, but at the same time build on everything else.”

At his third appearance at Skate America, Brezina performed a to “I’m a Man” and “Thunderstruck,” reeling off a quad Salchow-double toe and triple Axel-double toe. The 28-year-old doubled a solo quad attempt and stepped out of a triple Axel, but was otherwise solid and showed a good level 4 step sequence. He finished second in the free skate (157.42) and overall (239.51) to win his sixth Grand Prix medal.

“For me, it was a pretty good step up from my last competition in Salt Lake City and even from the last season,” said the 2018 U.S. Classic silver medalist. “It’s a better start than in my first Grand Prix. There are still some things that need work, but for the first Grand Prix, it is good. I could have skated a little better, but it’s the beginning of the season and there is still time to build.”

Voronov, who was in fourth after the short, finished fourth in the Free Skate (148.26) and third overall (226.44). The 2018 Nepela Trophy silver medalist opened with a quad toe-triple toe, but under-rotated and two footed the quad loop. He also fell on a triple Axel attempt and doubled a Lutz, but showed good spins in his routine to “Way Down We Go” by Kaleo, which was choreographed by the late Denis Ten.

“I can’t say that I’m satisfied as there were mistakes in the short and in the free program, but compared to previous, domestic competitions, it is a step forward,” said the 31-year-old. “It’s hard work, but there is room to grow for me to not fall behind my friends and competitors.”

#SkateAmerica bronze medallist #SergeiVoronov says that Making a #GPFigure podium is not a walk in the park. He is pleased, but wants to improve and land that 4Lo.?? #FigureSkating pic.twitter.com/hvoEZ1psn7

Matteo Rizzo of Italy under-rotated his quad and a triple Axel, but otherwise showed a gave a good performance to a Rolling Stones medley to finish fifth (147.72) in the free skate and fourth overall (225.81).

USA’s Vincent Zhou under-rotated two of his three quads, as well as a triple Axel in his routine to music from Crouching Tiger, Hidden Dragon and Rising Sun, but showed three strong level 4 spins to finish third in the free skate (149.37). With a total score of 225.75, he rose from sixth to fifth place.

Nam Nguyen of Canada rose from ninth to sixth overall, while Malaysia’s Julian Yee slipped from third to seventh.