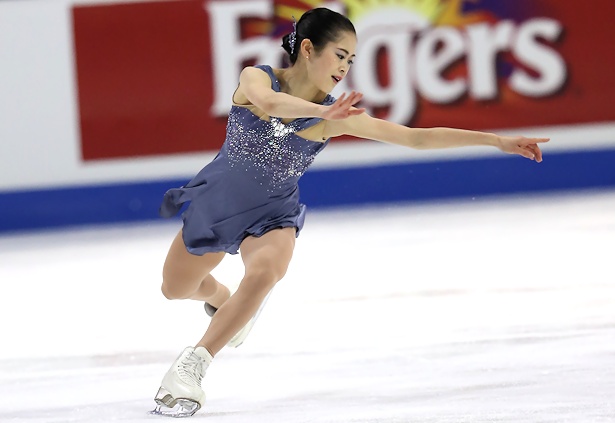 Displaying good artistry and expression throughout her routine to “Song for the Little Sparrow” by Abel Korzeniowski, Miyahara delivered a solid triple Lutz-triple toe, double Axel, and triple flip (edge call). The four-time Japanese champion showed also earned a level 4 on all spins and footwork, earning 73.86 for a first-place finish.

“Until I finished my three jumps, I was very nervous, because I could not show my best performance at the Japan Open and U.S. International (competition),” said the 20-year-old. “But after I landed the triple flip, I was really relieved and skated for myself.”

Sakamoto skated a light and airy routine to “From My First Moment” by Charlotte Church which featured a solid triple flip-triple toe, double Axel, and triple loop. The 2018 Four Continents champion earned positive Grades of Execution (GOE) on every element and finished second with 71.29 points.

“I am very pleased with my performance today and I got my best score,” the 18-year-old said. “The beginning of the season was difficult, but with the help of my coach, I was able to practice really hard.”

Samodurova gave a solid routine to “Nyah” from the Mission Impossible 2 soundtrack in her Grand Prix debut. The 2018 Lombardia Trophy silver medalist showed good transitions and landed a triple flip-triple toe, triple loop, and double Axel as well as level 4 spins for a score of 64.41

“I am very surprised, it is very unexpected,” said the 16-year-old from Saint Petersburg, Russia. “I am very happy with my performance. I did a good job with all my elements and I got a good score.”

Japan’s Marin Honda gave a fun and entertaining routine to “Seven Nation Army” by The White Stripes, smiling throughout. The 2017 U.S. Classic champion was under-rotated the back end of a triple loop-triple toe and a triple flip later, but showed strong spins and footwork. The 2017 World Junior silver medalist is currently in fourth with 62.74 points.

Bradie Tennell gave a dramatic performance to “Rebirth” by Hi-Finesse which featured a double Axel and triple flip, but the 2018 U.S national champion singled the loop on the backend of a triple Lutz combination. She also received an edge call on a triple flip, but earned a level 4 on all spins and footwork to finish fifth with a score of 61.72.

“Very, very rarely does that happen,” said Tennell of the mistake on the combination jump. “I think I just hesitated a little bit, but it’s not going to happen tomorrow!”