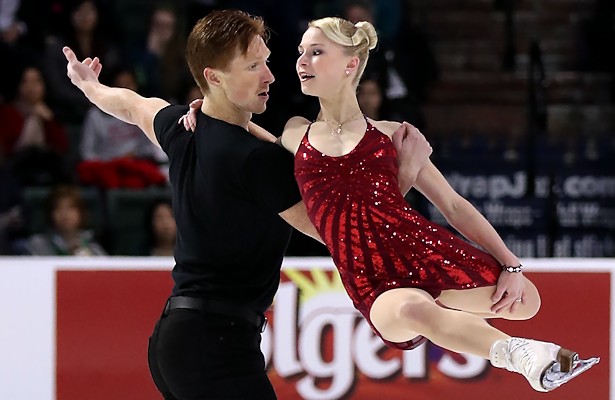 2018 Skate America, the first event of the 2018-19 ISU Grand Prix of Figure Skating series, kicked off with the Short Program in the Pairs discipline on Oct. 19th in Everett, Washington. Russia’s Evgenia Tarasova and Vladimir Morozov are the current leaders, followed by teammates Alisa Efimova and Alexander Korovin and Germany’s Minerva Fabienne Hase and Nolan Seegert.

Tarasova and Morozov skated an upbeat routine to “I Got You (I Feel Good)” by James Brown which featured a textbook level four triple twist, but Tarasova put a hand down on the throw triple toe and two-footed the landing of the throw triple loop. The team, who has be working with Maxim Trankov, also earned a level four on their combination spin and lift to earn 71.24 for first place.

Efimova and Korovin skated with intensity in their routine to “Human” by Rag’n Bone Man, displaying a good triple twist, however, Efimova stepped out on the side-by-side triple Salchows and fought for the landing on the throw triple loop. The team from Moscow also had trouble on the side-by-spin, but otherwise showed good footwork in their level four steps to earn 62.38 for second place.

“We enjoyed skating very much, but we had some mistakes,” Efimova said. “We started our international season in Germany (at Nebelhorn Trophy), and we felt better here at the Grand Prix event, but we were a bit nervous.”

Hase and Seegert placed third in their Grand Prix debut with 60.04 points. The 2018 German silver performed to “Say Something” by A Great Big World which featured a good triple twist, side-by-side triple toes, and a throw Triple Salchow.

“Our goal coming here was to skate to clean programs and the first (part of the) goal we met,” said Seegert. “This is the reward, and we want more.”

USA’s Ashley Cain and Timothy LeDuc performed a fun short program to “Bella Belle” by The Electric Swing Circus, however, the 2018 Four Continents silver medalists struggled throughout. The triple twist was two-footed, the team suffered a fall on the side-by-side triple loops, and had two-footed landing on a throw triple Lutz. They are in fourth with  57.72 points.

“We had some mistakes,” admitted LeDuc. “I fell down, but that happens. It’s ice skating; sometimes it’s a little more slippery and then you fall down. I think we are pretty amped up for the long. We really want to go out there and do what we came here to do. Some things got away from us, but that’s OK. We have to take it and move on. We are excited everything is the same. We want to build momentum and keep the season going and do better tomorrow.”

“The audience was super loud out there,” noted Cain. “It was exciting! Especially in our last minute. They were really amped up and cheering for us and the energy was incredible. We just kind of let the program get away from us a little bit and I feel like we weren’t quite all the way in the performance, which is weird because we were very ready. But things happen. You get up, you learn and you move on.”

Teammates Alexa Scimeca-Knierim and Christopher Knierim have undergone a complete change with new coach (Aljona Savchenko) and choreographer (Benoit Richaud) with a program that is a departure from their normal style. They struggled in practice as well as the competition, missing the side-by-side triple Salchows. She also slipped and fell after their blades touched during the step sequence. The husband-and-wife team finished in fifth place with 57.31 points.

“It’s just taking longer to get together than we’d like, but with all the changes we made this season, it’s not going to come together right away,” Knierim pointed out. “We see the big picture rather than just the short success. We are just going to keep working and keep striving for more at every competition basically.”

“Not looking at the protocol sheet, there were things that felt better than Nebelhorn, but there were things that were worse and things that need to improve and get better so it’s a growing process,” he added. “We are not rushing to make things happen right this second; we are going for a more long term approach. It’s upsetting not to skate to your potential, but it’s hard to expect that you are going to go out and skate clean programs after a couple months of making such a big change. So we are taking it step-by-step and day-by-day.”

It’s clear the current U.S. national champions are still working out the kinks and need a bit more time to get adjusted to the new style.

“We train more; more sessions a day,” said Scimeca-Knierim. “We do more lifts off ice, more reps of everything, more sections and sometimes we do the sections with doubles and some with triples. It’s always changing. We honestly just work harder.”