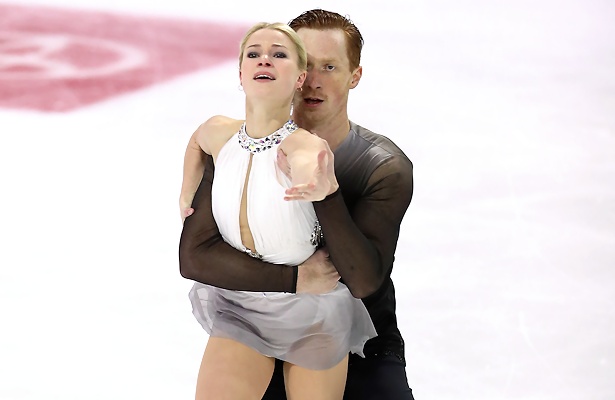 Russia’s Evgenia Tarasova and Vladimir Morozov maintained their overnight lead to win the first gold of the event in Everett, Wash., in Pairs figure skating. Teammates Alisa Efimova and Alexander Korovin maintained second place, while USA’s Ashley Cain and Timothy LeDuc moved up one spot to win the bronze.

Tarasova and Morozov delivered a solid program with the exception of a popped Salchow in the side-by-side jumps and a step out on the throw Lutz (a new element for the team). Their ethereal routine to “The Winter” by Balmorhea featured solid side-by-side triple toes-double toes-double toes, throw triple loop, and two level four lifts. The two-time World Championship medalists earned 133.61 for their free skate and 204.85 overall to win their first Skate America gold.

“Today we skated a little bit better than yesterday (in the Short Program) and at (the) Finlandia Trophy,” Tarasova said. “We started enjoying the program today.”

“We are happy that we’re halfway in the Final,” added Morozov.

Efimova and Korovin showed good speed and flow throughout their routine to “La Strada” by Nino Rota. The 2018 Nebelhorn Trophy champions had problems with their side-by-side jumps, however, they were otherwise clean, delivering strong level 4 lifts and throw jumps (triple Salchow and loop). They finished third (116.60) in the free skate and maintained second overall (178.98) to win the silver—their first Grand Prix medal.

“In today’s skate, many elements were good, but we made two big mistakes,” Efimova acknowledged. “It was our first competition on another continent. It was interesting and we were nervous and we found many details that we need to practice and improve for the future and for the next Grand Prix.”

Cain and LeDuc were committed to their performance to selections from the W.E. soundtrack which featured a strong throw triple Lutz, a throw Salchow, and good lifts. The only errors came when there was a two-footed landing and under rotation on the side-by-side triple loop and a mistake on the side-by-side triple Salchow-double toe combination. The 2018 U.S. International Classic champions finished second in the free skate (117.34) and moved up one spot overall (175.06) to earn the bronze.

“We were a little bit disappointed with our program yesterday, there were some silly errors,” said LeDuc. “It kind of awakened the fighting spirit in us and we definitely fought for everything today. There were some mistakes and some scary moments, but I’m really proud of Ashley and of the effort that we made.”

The coaching situation with Aljona Savchenko did not work out with U.S. Champions Alexa Scimeca-Knierim and Christopher Knierim who suffered two falls in the Free Skate, but move up one spot to finish fourth overall (171.56). Despite not having a “support team” at the event, the skaters plan to move forward and will be making decisions regarding their situation soon.

“Whatever lies ahead, we’ll be going through it together,” said Knierim. “It was insane how much work we were able to do with her (Savchenko) and hopefully we can work together again in the future.”