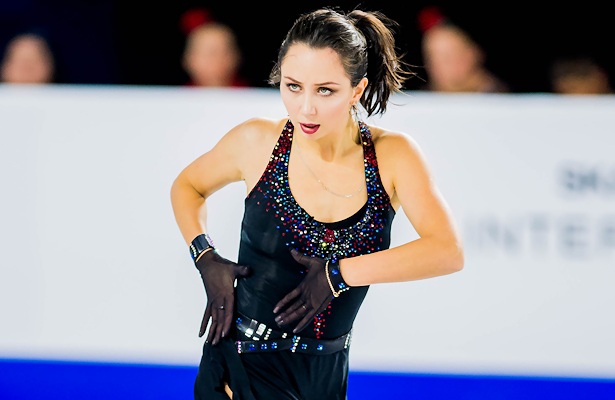 Elizaveta Tuktamysheva of Russia took the lead in the Ladies’ Short Program at 2018 Skate Canada on Friday evening. Wakaba Higuchi of Japan currently sits in second, followed by teammate Mako Yamashita who is making her Grand Prix debut.

Tuktamysheva channeled some of her 2015 World champion form to be class of the field, handily beating the competition with a clean program highlighted by a triple Axel. Tuktamysheva earned 74.22 points with her enticing routine to “Assassin’s Tango.” She also landed a galloping triple toe loop-triple toe loop combination and a soaring triple Lutz.

“I am really satisfied because I skated clean,” said the 21-year-old who has not competed at the World or Olympic level since 2015 given the caliber of Russian ladies. “I did all what I need today, so I just need to relax in preparation for the long.”

“I am in good condition this year and I just want to skate clean and I want to show everybody that I can skate and I can fight with the young ladies and other Russian ladies too,” Tuktamysheva said of her season’s goals. “I just want to enjoy it and have everybody enjoy my skating.”

Higuchi of Japan skated her funky short program to “Energia” with finesse to land second with 66.51 points. In her high-risk elements, the 2018 World silver medalist appeared well on her way to a solid skate with a confident double Axel and pristine triple Lutz-triple toe loop combination, but her triple flip received both an edge and under-rotation call.

Higuchi’s countrywoman, Mako Yamashita, landed third with a close score of 66.30. In her routine to The Barber of Seville, the 2018 World junior bronze medalist managed a triple Lutz-triple toe loop combination, double Axel and triple flip; though the flip received an edge call. Her spins were all graded a level four.

An interpreter advised that Yamashita said she did not get nervous and feels fighting nerves is her strength.

A surprise finish was Evgenia Medvedeva‘s senior record low score of 60.83 which landed her in seventh place. Despite a strong start to the program, the 2018 Olympic silver medalist awkwardly popped her triple flip, stepping out and abandoning the combination triple toe loop during her peppy Natalie Cole routine.

“Now I feel so so bad because it’s so stupid mistake and it never happens even in the practices, but it’s only the beginning of my way,” the Russian said. “I have a new body and a new mind.”

“I will remind this mistake to myself all my life,” the two-time World champion said. “A popped jump isn’t my habit at all. I feel so bad about it. I was really ready to do my best. Tomorrow, I will fight and I will do everything that is within my power.”