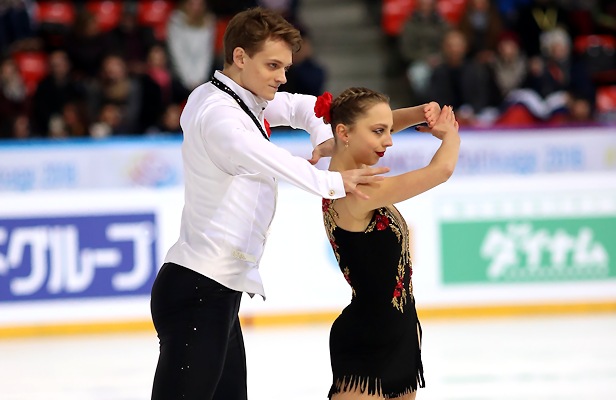 The Russian team of Aleksandra Boikova and Dmitrii Kozlovskii took a surprising lead in the Pairs event at the 2018 Internationaux de France in Grenoble, France on Friday night ahead of headliners Vanessa James and Morgan Cipres of France, who are currently in third place. North Korea’s Tae Ok Ryom and Ju Sik Kim are in second.

Boikova and Kozlovskii were nearly solid in their routine to “Dark Eyes” in which they nailed their side-by-side triple Salchows, triple twist, throw triple Salchow. The Finlandia Trophy bronze medalists also earned a level 4 on their footwork as well as the spin to earn a new season’s best of 68.83.

“Our performance was good, but I feel myself not in the right place right now, sitting here with these great sportsmen,” Kozlovskii said.

His partner Boikova said: “I feel comfortable and I think this is our place, but tomorrow is the free skating and we need to do our job.”

“We were a bit sad when we were fourth at Skate Canada,” she added, “but we were motivated to work even harder. Maybe it was good that we were fourth.”

Ryom and Kim also earned a new season’s best (67.18) for their routine to “A Day in the Life,” which featured a triple twist, side-by-side triple toes, throw triple loop, and level for footwork. The Asian Open silver medalists also earned the highest total element score (TES) of the event (38.09).

“We are very happy to do a clean performance and tomorrow we want to do our best again,” Ryom said. “We focused (after our first Grand Prix in Helsinki) on each technical element and the overall performance in practice.”

James and Cipres had a rough start when James uncharacteristically doubled and stepped out of the side-by-side triple toes and then had a shaky landing on the throw triple flip. Despite the mistakes, the 2018 Skate Canada champions delivered a strong level 4 triple twist and showed solid level 4 footwork in their routine to “Uninvited” and are currently in first with 65.24 points.

“Obviously that was not the performance we wanted to skate in France for the public and for ourselves, but it is normal that we sometimes make mistakes – we are human beings,” Cipres said.