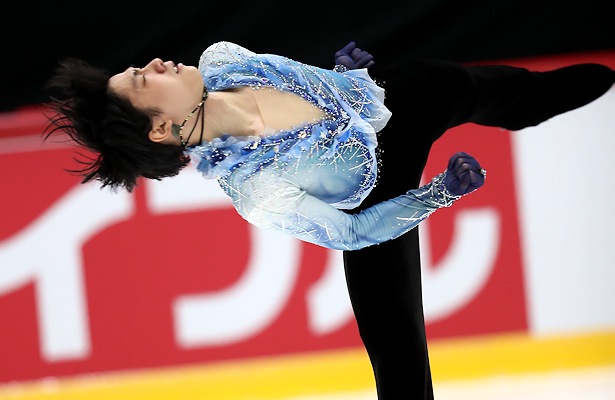 Yuzuru Hanyu of Japan took the lead in the Men’s Short Program at 2018 GP Helsinki on Saturday. Michal Brezina of the Czech Republic currently sits in second followed by China’s Boyang Jin.

Hanyu was solid in his routine to “Otonal” by Raul di Blasio, nailing a quad Salchow, triple Axel, and quad toe-triple toe combination. The two-time Olympic champion also earned a level 4 with high grades of execution (GOE) on all of his spins. He finished with 106.69 points for new season’s best.

“I need to train more and more,” said Hanyu, adding that he appreciates all the fans. “I can improve the jump landings and on the entry. I was not confident to do the jumps. Today’s performance in the short program was a bit challenging because I changed a little of the pattern. I landed (the jumps), but I can’t say that it was perfect.”

“I have good memories of Helsinki,” he added. The skater set a new record for the free skate at the 2017 World Figure Skating Championships, which were held in Helsinki. “But I couldn’t do a proper short program,” he said, regarding his fifth-place finish in that segment of the event. “Today, I was fighting those memories. Finland is special to me and this competition is not a usual place for a Grand Prix. I just want to say ‘thank you’ to the federation. I’m so happy to skate here for the Grand Prix.”

Brezina was strong in his routine to “Who Wants to Live Forever,” landing a quad Salchow-triple toe, triple flip and triple Axel. The veteran skater also earned a level 4 on his footwork as well as two of his spins to score a season’s best of 93.31.

“I don’t know,” said Brezina with a smile when asked what he’s been doing to perform so well this season. “It’s funny. Sometimes people tell me, ‘you are like wine, the older it gets, the better it gets,’ but I really don’t like wine.”

“I feel really good,” he continued. “I think that all the work that we did with Rafael (Arutyunyan) in the past two and half years has finally started to pay off and it’s nice to back and on the top where I was. Something happened that just wasn’t working and now I think that everything that I had, I’m starting to get back. It feels really good to be on the ice and put the work in and come to competition and get rewarded.”

“I have a wife for that,” Brezina joked responding about stress, when asked if he feels more relaxed as he gets older. “No, she (Danielle Montalbano) is the one thing that makes me a lit bit more relaxed. I have something else to live for. When I’m home, I do different things and I don’t have skating in my head all the time. I think that helps the most.”

Jin fell on the back end of his opening quadruple Lutz-triple toeloop combination, but recovered to land a quadruple toeloop and triple Axel. The 2018 Four Continents champion otherwise showed good footwork and spins in his routine to “While My Guitar Gently Weeps,” earning 85.97 points.

“I feel like I have a little confidence in the new season,” said the 21-year-old. “I have some regrets about my short program. I missed my first jump, but I am quite happy about my second jump.”

Junhwan Cha of South Korea finished fourth with 82.82 points. The 2018 Skate Canada bronze medalist landed a solid quad Salchow and earned a level 4 on all spins and footwork, but underrotated the back end of a triple Lutz-triple loop as well as a triple Axel.

Russia’s Andrei Lazukin is currently in a close fifth (82.54) followed by teammate Mikhail Kolyada ( 81.76) who struggled with several jumps.