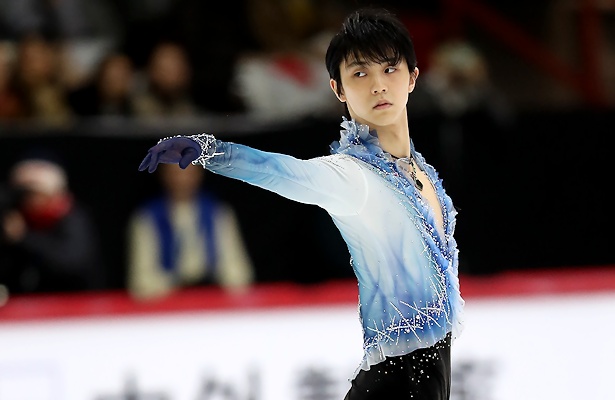 Japan’s Yuzuru Hanyu dominated the Men’s Short Program with more than 20 points to spare at 2018 Rostelecom Cup in Moscow, Russia, on Friday afternoon. Gerogia’s Morisi Kvitelashvili, who was finished eighth at Skate America earlier this season, currently sits in second followed by Alexander Majorov of Sweden.

Hanyu nailed a quad Salchow, triple Axel, and quad toe-triple toe, racking up high grades of execution (GOE) on all jump passes as well as his level 4 footwork and spins. The two-time Olympic champion scored a season’s best of 110.53 for his flawless routine to “Otonal” by Raul di Blasio.

“I am satisfied with my performance,” said the 23-year-old. “I can’t say it was perfect, especially not the quad toe-triple toe (which scored no less than +3 GOE), but I am happy I got a level four for each elements and the GOE for the triple Axel and the quad Salchow was really good!”

“There was not enough time in between the competitions (the two Grand Prix events in Helsinki and Moscow) and I needed to control my training in the last week, which was a little hard,” he added.

Kvitelashvili reeled of a quad Salchow-triple toe, triple Axel, and quad toe in his routine to “Bloodstream” by Tokio Myers. The skater, who is coached by Eteri Tutberidze and Sergei Dudakov, scored a new season’s best of  89.94.

“I did everything as planned, but there is still room for improvement,” said the 23-year-old who trains in Moscow. “I really enjoy skating in this competition. There is a positive atmosphere that leads to good performances.”

Majorov hung onto the landing of a quad toe, but showed a solid triple Lutz-triple toe and triple Axel as well as level 4 spins and footwork in his routine to “Bang Bang” by Asaf Avidan. The 27-year-old earned 82.33 points.

“I made a small mistake on the quad toe,” the 2018 Nebelhorn Trophy silver medalist observed, “but all elements were a level four, which was good. I will try to fix the mistake in the long program.”

Japan’s Kazuki Tomono is currently in a close fourth with a season’s best of 82.26 points after his performance to “Tema d’Amore” from Cinema Paradiso. The former Japanese junior champion under-rotated a quad Salchow, but showed a good triple flip-triple toe and triple Axel.

USA’s Alexei Krasnozhon is in sixth with a personal best of 75.32, followed by Keegan Messing of Canada (73.83).