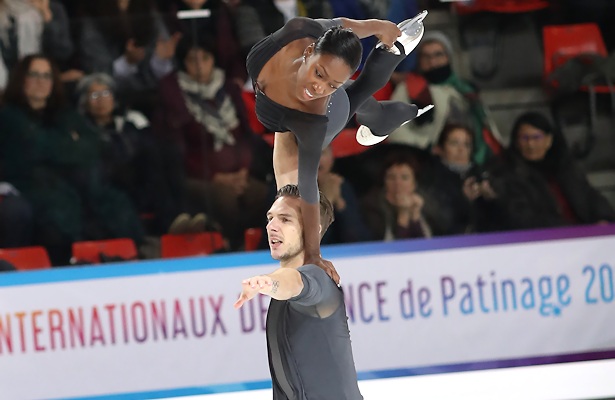 Vanessa James and Morgan Cipres of France rebounded from third place after the short program to capture the gold at the 2018 Internationaux de France on Saturday night. USA’s Tarah Kayne and Danny O’Shea moved up from fourth to second to win the silver, while the Russian team of Aleksandra Boikova and Dmitrii Kozlovskii slipped to third overall for the bronze.

James and Cipres were near-perfect except for a doubled Salchow in the side-by-side jumps in their technically powerful routine to “Wicked Game” and “The Last Feeling.” The Skate Canada champions otherwise delivered a strong level 4 triple twist, side-by-side triple toe-double toe-double toes, difficult lifts, and level 4 spins. They scored 140.53 for first place in the free skate and overall (205.77), earning a ticket to the Grand Prix Final (GPF).

“We’re really happy to win this competition,” Cipres said. “It’s the first time for us to win two Grand Prix in the season and to go to the Grand Prix Final. We have a lot of work to do for these next two weeks.”

“Were both happy with the fight today, especially after a disappointing short program yesterday,” added James. “We’re very proud to have our second gold medal at a Grand Prix. We just have more work to do mentally and try to skate even better than at Skate Canada. It’s nice to have made these few mistakes here to learn from them and be perfect for the next competition.”

Kayne and O’Shea earned a new season’s best of 127.98 for their “Swan Lake” routine which featured side-by-side triple Salchow-Euler-double salchows, a triple twist, throw triple loop, throw triple Salchow, and level 4 lifts and spins. The only mistake came when Kayne put hand down on the side-by-side double Axels. The Four Continents champions finished second in the free skate and overall with 191.43 points. They are currently the second alternates moving into the GPF.

“Danny and I are very pleased with how we skated at this competition on the whole, especially the free skate,” Kayne said. “Our free skate at NHK (Trophy), our first Grand Prix, was less than desirable, especially on my part. So to have come to France and make this much improvement in just two short weeks made us both very happy.”

Boikova and Kozlovskii fell from first to third overall after Boikova stepped out a triple toe combination and and couldn’t hold the landing of a huge throw triple loop. Despite the mistakes, the Lombardia Trophy silver medalists otherwise showed level 4 lifts and a good triple twist in their “Nutcracker” routine, earning 121.01 points for a third-place free skate and third overall (189.84).

“We had a good experience here, but we have to work harder,” Boikova said. “I hope you’ll see us in a better shape next time.”

“It was our first medal in the Grand Prix, which is nice, and I hope that we’ll skate better in the future,” Kozlovskii added. “We need to do step by step.”

North Korea’s Tae Ok Ryom and Ju Sik Kim finished fourth in the free skate with a new season’s best of  120.77 and overall (187. 95), just missing the last spot on the podium. The Four Continents bronze medalists delivered a solid triple twist and  side-by-side triple toe-double toe-double toes, however, Ryom under-rotated the side-by-side double Axels and stepped out of a throw triple loop.