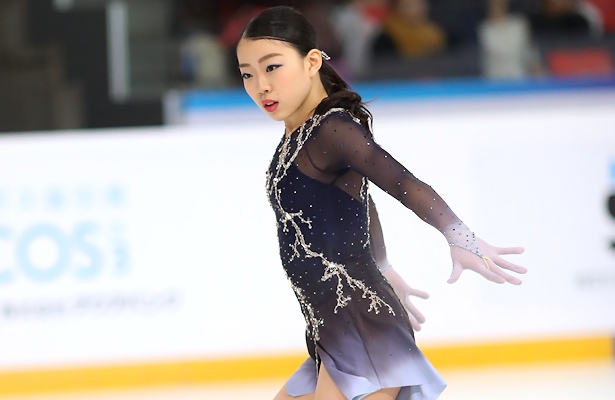 Rika Kihira of Japan performs her Free Skate at the 2018 Internationaux de France.

In her first season on the Grand Prix circuit, Japan’s Rika Kihira moved up from second to capture the gold (her second one, NHK Trophy) in the Ladies’ event at the 2018 Internationaux de France on Saturday evening. Teammate Mai Mihara took the silver while USA’s Bradie Tennell rose from sixth to secure the bronze.

Kihira under-rotated a huge triple Axel in her ethereal routine to “Beautiful Storm” by Jennifer Thomas. The 16-year-old also under-rotated the back end of a triple Lutz-triple toe, but otherwise landed a total of six clean triple jumps, showing good spins and footwork throughout. She finished first in the free skate (138.38) and overall (205.92), signing her ticket to the Grand Prix Final.

“Considering that I couldn’t condition my body well, I did what I could do,” said the NHK Trophy champion. “I’m happy about my victory, but I’m not satisfied with my performance and my score. I hope to do better in the Grand Prix Final.”

Mihara gave in inspiring performance to music from The Mission soundtrack in which the only mistakes were a under-rotated triple toe (in combination with a double Axel) and a doubled Salchow. The Four Continents silver medalist otherwise produced five clean triple jumps, showing good footwork throughout, and earned a level 4 on all spins. She finished third in the free skate (134.86) and second overall with 202.81 points, and is currently the first alternate going into the GPF.

“Today I am not satisfied with my free skating,” the 19-year-old said. “Before I skated, I almost burst into tears, but my coach told me, ‘don’t worry, I’m here with you’ and that was a relief. Overall, it was a good experience for me and I will continue to practice to gain more confidence.”

Tennell’s flowing routine to Romeo and Juliet by Prokofiev featured five triple jumps, however, the 20-year-old under-rotated the back end of a triple Lutz-triple loop and the front end of a triple flip-double toe-double loop. Despite the mistakes, she earned high grades of execution on her level 4 spins and footwork, finishing second in the free skate (136.44) and third overall (197.78).

“I’m pretty happy with how today’s performance went,” the U.S. champion said. “To come to an event like this and skate like I have been practicing is really rewarding. Obviously, I still want to improve on things in the program and yesterday’s performance can be much improved as well.”

Stanislava Konstantinova of Russia rebounded with a good fourth-place free skate (134.76) which included seven triple jumps and two level 4 spins in her routine to music from the Anna Karenina soundtrack. The GP Helsinki silver medalist finished fifth overall (189.67) and is the second alternate moving into the GPF.

Teammate Evgenia Medvedeva stumbled out of her opening double Axel and the back end of a triple flip-triple toe to finish fifth in the free skate (125.26) and fourth overall (192.81), taking her out of contention for a possible spot at the GPF (third alternate).