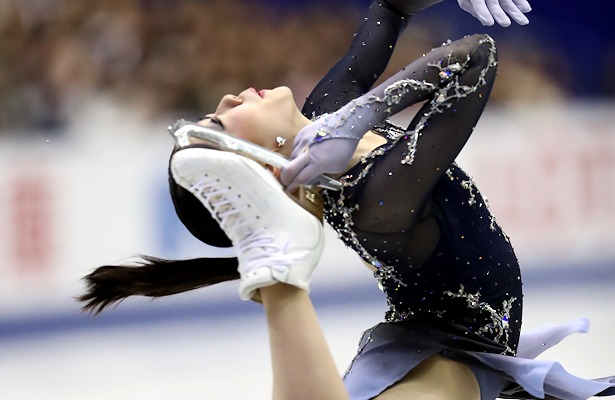 The 16-year-old defending Japanese junior champion earned a season’s best of 154.72 points in her free skate performance to “Beautiful Storm” in Hiroshima on Saturday.

“I really don’t feel like it’s all done and I achieved this,” said the 2018 Ondrej Nepela Trophy champion. “When I finished my short program, I didn’t think I would be up here today. The short program motivated me to be good today. I never would have imagined I would get such a high score. I need to look into other improvements and get even better scores. Tomorrow and the day after tomorrow, I should be more motivated.”

Kihira wowed the crowd at Hiroshima Green Arena, opening with a triple Axel-triple toe and followed that with an equally impressive triple Axel. Two more triple Lutz combinations, along with level 4 spins and footwork, paved the way for the surprise victory (224.31).

“There were some conversations over the triple Lutz,” said Kihira of her coach Mie Hamada, “and today in practice I perfected my triple Axel, and I’m very happy. I think it’s a good environment I always skate in, and it’s something I am always thankful for.”

Miyahara scored 143.39 points for free skate to “Invierno Porteno.” While the spins and footwork were top notch, the four-time Japanese champion under-rotated two jumps and received edge calls on her two triple Lutzes. With a total score of 219.47, she was able to maintain second to win the silver.

“I did better in my short program,” admitted the 20-year-old from Kyoto. “I was very nervous in my long program. I am disappointed, but I know that I will try harder, so I do better in the future. I qualified for the Final, and I just want to do my best. I think there are a lot of reasons, maybe because I was the last to skate or that I was so satisfied with my short program that I couldn’t focus on my long program.”

“Still, I think this competition gave me confidence because I did well for my second competition of the season, added the 2018 World bronze medalist. “Compared to before, I was able to do my jumps better even when I am nervous, so that is an improvement I noticed.”

Elizaveta Tuktamysheva of Russia had a shaky landing on her triple Axel, but dazzled with strong spins and footwork as well as six more clean triple jumps to earn 142.85 points – a new season’s best. She finished third overall to win the bronze with 219.02, missing second place by less than half a point.

“If it weren’t for my coach, and also my choreographer, I wouldn’t be the skater I am today,” said the 20-year-old. “Over the years, they have been encouraging for me to improve myself and challenge myself to go beyond my own limits. The most interesting thing to me is to challenge myself with all of the elements.”

Kihira wasn’t the only skater with a big improvement overnight. Mariah Bell of the U.S. rose from seventh place to fifth overall with 198.96 after nailing a triple Lutz-double toe loop- double loop combination midway through her skate.

“I just felt like I never put out such a solid skate,” said the 22-year-old, “and it’s my best free skate by five points, and I got that two years ago. I just feel like all of my work is paying off. The side I need to work on the most is the mental aspect, and I feel like I really conquered that. I was really bummed yesterday because I let the Lutz-toe get away from me, and today, I didn’t let anything get away from me.”

Bell added that her silver medal at Skate America and bronze at nationals were not as special, as they were unexpected, and at this stage of her career, she is expected to skate at the elite level.

Mai Mihara fell from bronze position to fourth to eliminate the chance for a Japanese sweep. The 19-year-old from Kobe put out a strong program (133.82) with the exception of under-rotated triple toe on the back end of a triple Lutz.

“I really wanted to focus on getting my triple jumps rotated so I could clearly demonstrate that the rotation was full,” said Mihara. “My practice sessions, even in the morning, weren’t going really well, so I wanted to make sure I did everything I was doing in practice. I think if I can train more and convince myself to be confident, I can put in a better performance in the competitions. I have achieved about one percent of my real dream right now, which is to compete at the Olympics.”