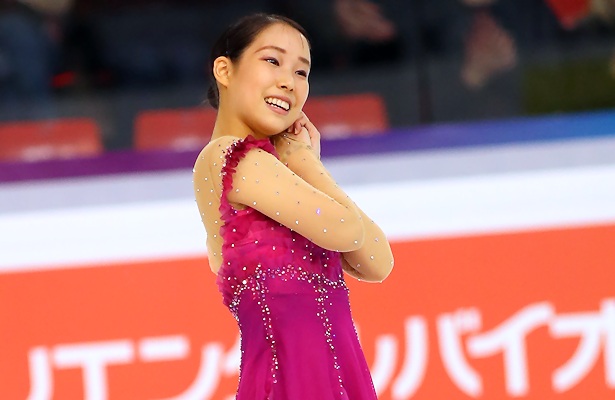 Mai Mihara of Japan hold the lead in what is a virtual tie with teammate Rika Kihira and Russia’s Evgenia Medvedeva after the Ladies’ Short Program in Grenoble, France.

Mihara under-rotated the back end of a triple Lutz-triple toe, but was otherwise solid in her routine to “It’s Magic” by Doris Day. The 2018 Four Continents silver medalist landed a triple flip, double Axel and showed level 4 spins and strong level 3 footwork to post 67.95 points.

“I’m a little surprised to be sitting here right now,” said the 19-year-old from Kobe, Japan. “I was lacking a little speed from the beginning. After the NHK Trophy, I was practicing my triple-triple (combination) very hard and I put a lot of energy in it. I am disappointed that it didn’t happen today, but my motivation goes up and I want to show a clean performance tomorrow.”

“I regret the (popped) triple Axel a lot, but I landed the triple flip-triple toe and the triple Lutz cleanly,” said the 16-year-old who won gold at NHK Trophy earlier this month. “Tomorrow in practice I’ll check on my triple Axel again. I don’t think much about my score, I just want to leave my mistakes behind.”

Medvedeva received an edge call on her opening triple Lutz and had a shaky landing on the triple flip-double toe (meant to be a triple), but managed two level four spins to place third with 67.55 points for her routine to “Orange Colored Sky” by Natalie Cole.

Japan’s Marin Honda earned a season’s best of 65.37 with her bluesy rock routine to “Seven Nations Army” by The White Stripes. The 17-year-old from Kyoto under-rotated her opening combination jump, but delivered strong spins and footwork to finish fourth.