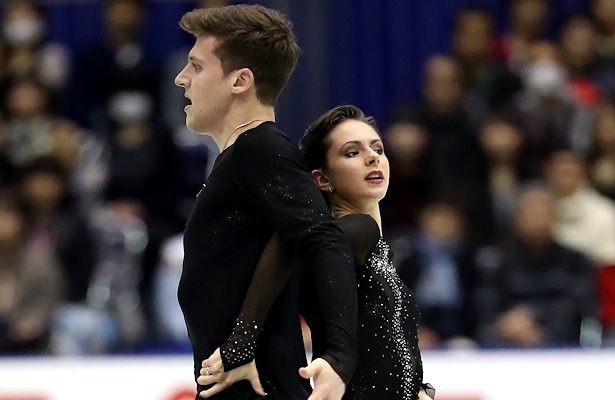 The Russian pair of Natalia Zabiiako and Alexander Enbert won an ISU Grand Prix event for the second time in as many weeks, taking home the gold from 2018 NHK Trophy at Hiroshima, Japan, on Saturday to complement the one they earned in Helsinki just days earlier.

“We are very happy with today’s performance,” said Zabiiako. “It was over so soon. We were happy to put it in our positive energy. We felt like we were at home with the crowd, and it added so much emotional support. I am happy with what we did. “We were able to execute all of our elements on the ice.”

With this win, they became the first Russian team to win the NHK Trophy since Tatiana Volosozhar and Maxim Trankov in 2013.

Composer Igor Krutoi’s piece “Toi et Moi” became very special to the team, according to Enbert, and they even formed a bond with him.

“We contacted Krutoi, who did the music,” said Enbert. “We were able to discuss the program together so he would construct great music to go with it.”

Now, they are on to the Grand Prix Final in Vancouver next month, an event where they finished fourth two years ago.

The Chinese pair of Cheng Peng and Yang Jin also earned a season’s best (136.58 points) for their near-perfect routine to “La Vie En Rose.” The throw jumps were huge and the skaters showed level 4 spins, however, one of the side-by-side triple Salchows was doubled.

“Today’s performance was relatively happy and we were able to renew our personal best,” said Jin, “so it was important. Except for the last lift, we were able to get the right scores. In two previous Grand Prix Finals we took part in, our performance was not quite satisfying. This year, we have more time before the Grand Prix Final, and all of the difficulties, we have time to improve them.”

“In the previous Grand Prix series,” said Peng, “there were four pairs from China, and this season, we are the remaining team. So during the training period, we feel like we miss our teammates, but advancing to the Grand Prix Final is something we are proud of.”

The U.S. team of Alexa Scimeca-Knierim and Chris Knierim won bronze to give them their third career Grand Prix medal and first since this event in 2015. The Americans skating to “Wicked Game,” and opened well with a triple twist before under-rotating a triple Salchow combination and a turn out on the triple toes. Still, it was a season’s best of 125.74 points.

“If we got anything out of this event,” said Scimeca-Knierim, “rather than skating well, it’s reassurance that we’re on the right track, which is something we’ve been trying to find. We’ve had a different training regiment after Skate America (where they finished in fourth place) with new coaches, so we took our time trying to explore that route. Going into Japan, we know where we are as far as preparation, and we just stuck to the course with our guidance.”

Her husband noted that time and attitude towards training attributed to their improvements. They are not stressing where they finish so much this season, as that will come in the next three approaching the Beijing Olympics, and this is a building season.

“It’s a huge improvement on our last two competitions,” said Knierim. “We made a lot of improvements on a lot of the elements, so we’re just happy. There’s more we need to do to make sure everything is perfect. There is still more on the GOE side, but with everything we’ve been doing since last summer, it’s great to get back to a strong program.”

Kirsten Moore-Towers and Michael Marinaro of Canada scored 121.96 points to finish in fourth place, skating to the music of Pink Floyd.

“I think the NHK and the other competitions so far this season, we’ve improved a ton,” said Moore-Towers. “This is our fourth competition in seven weeks, and this one was a little sticky for us. We love competing in Japan, and I think there are certain elements we need improvement on, and we have a good, solid month and a half before nationals.”

The 2018 Autumn Classic silver medalists had a less than par performance at this event, losing lots of grade of execution (GOE) points on the triple twist, side-by-side jumps, and throw triple loop in their routine.

“We are disappointed with how this turned out,” said Marinaro, “but we’ll be back hopefully at Four Continents and Worlds. We have had much better performances than what we did this weekend, and we’re training extremely well, and we’ll be fighting for everything.”