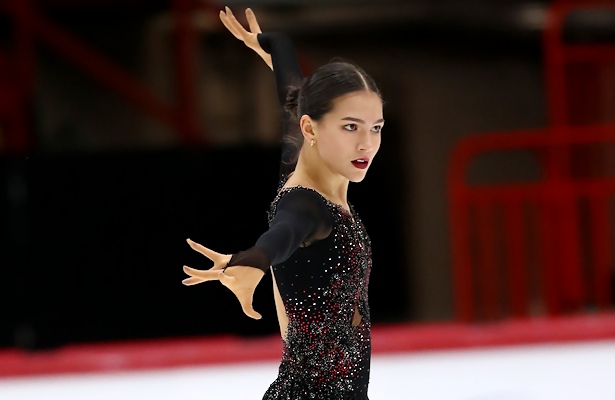 Russia’s Stanislava Konstantinova made her Grand Prix debut at 2018 GP Helsinki where she finished second.

Russia’s Stanislava Konstantinova started her first full senior season with a bang when she took silver in her first Grand Prix in Helsinki earlier this month. That was a big step forward for the 18-year-old skater that has already seen some ups and downs in her career.

GP Helsinki began with a lot of stress for the two-time World Junior competitor. When she arrived Wednesday morning to the train station to travel from her hometown St. Petersburg to Helsinki together with her coach Valentina Chebotareva and her teammates Mikhail Kolyada and Andrei Lazukin, she suddenly discovered that she didn’t have the right passport with her.

“I am always very responsible when it comes to documents,” she said. “I remembered exactly that I had put my national ID card and the passport into my bag. My mom said, ‘Stasia, check your passport’ and I said ‘sure, right away.’ I pull out the national ID card and I couldn’t find the passport right away. Then I got it, showed it to my mom, and then I opened it and I see the old photo!”

There were 20 minutes left before the departure of the train and her home is a forty-minute drive away. There was no chance to get the passport in time.

“I felt like I was struck by lightning,” Konstantinova recalled. “I started to cry. I realized that I’d miss the train, that I’d have to take the train the next morning or that night. I needed to buy a ticket myself. Luckily my mom wanted to come anyway, just a day later, but she drove me and my sister to Helsinki right away.”

Konstantinova arrived Wednesday evening in the Finnish capital and thus was able to attend the practice on Thursday. She almost came late, though, because she missed the bus, got in a cab, but the driver took her to the wrong ice rink.

“You know, I had a streak of bad luck – my laces ripped, my tights ripped, I had a new dress that I needed to try out and that I wore for the first time in practice on Thursday,” said the skater. “Thank God it fit me well!”

“I was really mad at myself,” Konstantinova continued. “Usually I am not that disorganized. It really stressed me out and I tried not to take it into the next days. I imagined that I was just starting from scratch and that everything went well.”

The short program to “Malaguena” didn’t go that well, however. Konstantinova missed the triple flip. She came back strong with an excellent free to “Anna Karenina” and pulled up from fourth place to take the silver medal.

“I really like this character and this music,” the teenager said about the free program she kept from last year. “I get into it, I kind of live in it for these four minutes. But I can’t skate it with eyes closed, because for this second season, we’ve basically changed it completely. We’ve changed the entries and made some corrections for almost each element.”

The changes were connected to the change in the scoring system that was introduced this season. Konstantinova, her coach and her choreographer, Olga Kliushnichenko, changed the order of the elements, added many in-between steps and transitions. Following the Challenger Series events at Ondrej Nepela Trophy and Finlandia Trophy, where Konstantinova came third and fourth respectively, the team made some further changes.

“Some people are telling me, ‘why do you always change things?’, but I’m just trying to find the ideal entries and transitions that are comfortable for me and that look nice and interesting,” Konstantinova pointed out. “It is never too late to think of something new if it suits you and looks nice.”

The Russian Junior bronze medalist had come off a difficult 2017-18 season. She missed the podium at Junior Worlds, coming in fourth, and then she was sent as a replacement for Evgenia Medvedeva to Worlds in Milan, Italy, where she more or less bombed and finished a disappointing 19th.

“I was really down after that,” the skater recalled. “I am very grateful to my family that they supported me in this difficult time, thankful to the fans that didn’t turn away from me and continued to support me. I healed my soul through work and I drew a lot of conclusions for myself. One of which is that you need to look after your health better throughout the whole season. And I still need to work on my confidence.”

She revealed her recipe for getting more confident: “The most important thing is probably not to pay too much attention to failures and focus on the positive. For example, before when I did ten great jumps (in training) and one bad attempt, then I would remember the bad one. I left the practice not thinking ‘wow, I did ten great attempts, well done’, but I was thinking ‘this one attempt, how could that be?’ Now I’m trying more to think about the positive things, I’m trying not to scold myself for little failures. I’m trying to be more focused and keep everything under control concerning the preparation for training. I try not to come late, to get my things together, to always look good in training, to do a good, quality warm up … basically everything. If there is chaos in life, you won’t have consistent results in the sport.”

Konstantinova also feels it is important to be able to trust yourself in order to be able to skate in competition as well as in practice. “I learned that I can really rely on myself, just go out and think about something good and just skate and enjoy what I’ve worked on.”

In Helsinki, Konstantinova and her coach planned mainly to leave a good impression. The silver medal was a bit of a surprise. For the second Grand Prix, the expectations are maybe higher, but the field in Grenoble is very deep with NHK Trophy Champion Rika Kihira, two-time World Champion Evgenia Medvedeva and others. However, Konstantinova is not intimidated.

“The second place in Helsinki gave me probably another kick to work even harder,” she noted. “I don’t want to be a second-tier skater. As my coach Valentina Mikhailova (Chebotareva) said, “If you just want to be a nice girl with potential, then continue to work the same way. But if you want more, then you need to work more.”