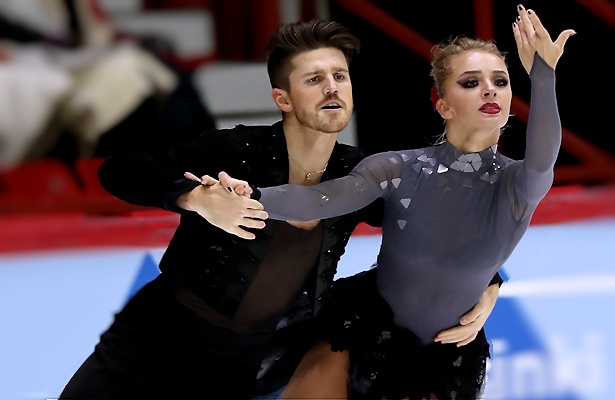 Alexandra Stepanova and Ivan Bukin of Russia perform the Paso Doble and Tango for their Rhythm Dance.

Russia’s Alexandra Stepanova and Ivan Bukin took the lead in Ice Dance after the Rhythm Dance at 2018 Rostelecom Cup on Friday afternoon in Moscow, Russia. USA’s Christina Carreira and Anthony Ponomarenko are currently in second followed by Spain’s Sara Hurtado and Kirill Khaliavin.

Stepanova and Bukin had some uncharacteristic mistakes in their tango pattern that resulted in low levels. The team also only earned a level 2 on their midline steps, whereas it was graded a 3 at GP Helsinki. Nevertheless, the Russian silver medalists otherwise delivered a nice level 4 curve lift and solid twizzles to score 74.49 for a first-place finish.

“Today not everything worked out, which is a shame since it happened here at home,” said Stepanova. “It is just another experience for us. Tomorrow we want to perform better and learn from our mistakes.”

“It is difficult to analyze [the mistakes] right now as it just happened,” added Bukin. “We will look at it, but not today as we have the free dance tomorrow and are preparing for it.”

Carreira and Ponomarenko put out solid level 4 twizzles, as well as a level 4 rotational lift, and showed good level 3 diagonal steps, earning 69.01 points for their routine to music by Jacob Gade and Piazzolla.

“We are very happy with how we skated,” said Carreira, “although it was not perfect.”

Hurtado and Khaliavin of Spain earned a new season’s best (66.40) despite a problem on the twizzles for Hurtado and a midline step sequence that was graded a level 2. However, their routine included a nice level 4 curve lift as well as a level 3 on their first tango pattern.

“It wasn’t our best performance of this program today,” said Hurtado, “but everything that we’ve worked on from our previous Grand Prix, there was a lot of improvement in other parts of the program.”

Natalia Kaliszek and Maksim Spodiriev of Poland are currently in fourth place with a new season’s best of 66.30, followed by Lithuania’s Allison Reed and Saulius Ambrulevicius  (64.54).