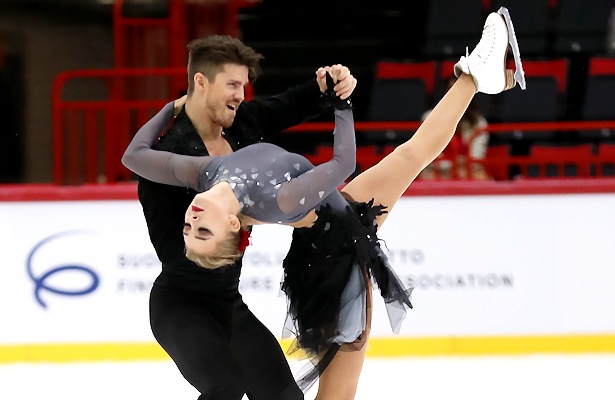 Russia’s Alexandra Stepanova and Ivan Bukin took the lead in Ice Dance after the Rhythm Dance at GP Helsinki on Friday. Charlene Guignard and Marco Fabbri of Italy are currently in second, followed by USA’s Lorraine McNamara and Quinn Carpenter.

Stepanova and Bukin showed solid twizzles in their tango routine, along with good level 3 midline steps and a level 4 curve lift, while meeting seven of their eight key patterns. The Russian silver medalists scored 78.18 points for first place.

“This is the first competition of the season where we were able to show the whole short dance,”said Stepanova. “Our coaches were pleased and we think the audience approved and we’re also quite happy about it.”

The patterns of the Tango Romantica are one of the most difficult ones to perform, and the top three skaters were asked to give their input on their approach.

“The Tango Romantica is a really difficult dance,” Bukin agreed. “When we started learning it, we were thinking, ‘how on on earth can people do three rounds of it?’, but we really like this dance. It’s full of elements and it’s really harmonious and so we really enjoy this dance.”

Guignard and Fabbri of Italy had to take the starting position three times before the correct music was played. The first time, a look of bafflement and humor fell over their faces as strains from “Claire de Lune” played. They took it in stride while the audience applauded, and skated around the rink until called again.

“We don’t know what happened, because we haven’t had time to ask anybody,” said Fabbri of the music issue. “When you step on the ice, you have 30 seconds to take your place and then the music starts. If it doesn’t start, it’s a little bit hard to keep the focus. But tonight, the crowd was helping because they cheered for us a lot and supported us.”

“We will be checking our music before the Free Dance,” he said.

Nevertheless, the Italian silver medalists earned a season’s best of 77.36 with their tango which featured solid level 4 twizzles and a nice stationary lift. However, while the team had the highest technical score of the event, they received a one-point deduction for a time violation which resulted in a second-place finish.

On the Tango Romantica, Fabbri said it was one of the most beautiful dances created, along with the Finn step and Golden Waltz.

“Of course it’s much harder,” he said. “Rhumba of last year was a little bit easier. We were very excited when we learned we would be skating to Tango Romantica this season. We never had the opportunity to skate a tango, so we are very happy with this choice by the ISU.”

McNamara and Carpenter finished third (71.40) after their smooth routine which featured level 4 twizzles and a level four rotational lift.

“We are really excited to be here,” said Carpenter. “It’s our second Grand Prix of the season and we both had a really great time with the Rhythm Dance tonight. The crowd was fantastic and definitely looking forward to tomorrow.”

Teammates Christina Carreira and Anthony Ponomarenko are currently in fourth (66.93), closely followed by Sara Hurtado and Kirill Khaliavin (66.25) of Spain.