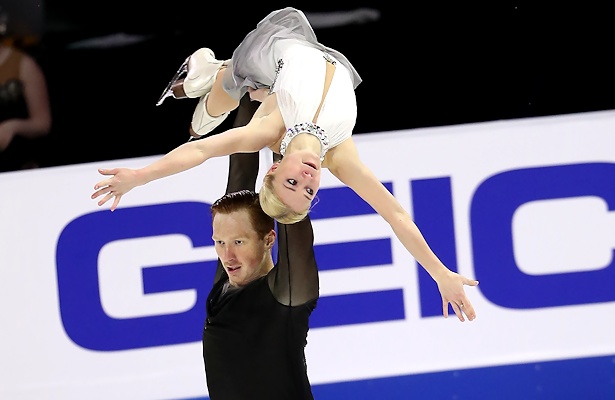 Russia’s Evgenia Tarasova and Vladimir Morozov defended their title at 2018 Rostelecom Cup in their third appearance at this event. Nicole Della Monica and Matteo Guarise of Italy  and Russia’s Daria Pavliuchenko and Denis Khodykin maintained second and third, respectively, to win silver and bronze.

Tarasova took a crash into the boards during a run-through at practice and had to be taken to the hospital for stitches in her chin. The skater returned sporting a bandage, determined to compete, and the team from Moscow scored a new season’s best (141.78), finishing first in the free skate and overall (220.25).

“It was a difficult day today,” said Tarasova. “I lost a lot of time when I went to the hospital, so we couldn’t prepare for the free skating as usual. Considering that, we skated quite well, I just made one major error.”

Della Monica and Guarise gave a strong performance to “Tristan and Isolde” by Maxime Rodriguez which featured side-by-side triple Salchows, a throw triple loop, difficult lifts, and a huge throw triple Salchow. The team’s only major mistake came on a singled jump on the back end of the side-by-side triple toe-double toe combination. The Italian champions earned a new season’s best of  131.51, placing second in the free skate and overall (203.83).

“I want to thank Moscow for giving us great emotions,” Guarise said. “We felt almost like being at home. It was a good battle. The legs were shaking, but we have been training very hard mentally and physically.”

“It is the first time in the history of figure skating that an Italian pair skating team has qualified for the Grand Prix Final,” Della Monica noted. “It was a goal for us for the first part of the season and we achieved it.”

Pavliuchenko and Khodykin suffered two falls in their performance to music from The Great Gatsby soundtrack, one of which was just a fluke and the other on a throw triple flip. The 2018 World Junior champions were otherwise solid, landing side-by-side triple flips and a triple toe-double toe-double toe combination. They also earned a level 4 on their triple twist, two lifts, and spin to finish fourth in the free skate (120.63) and third overall (190.01).

“We are happy with our result, but we made some mistakes,” Pavliuchenko acknowledged. “Next time we’ll hopefully skate clean.”

Austria’s Miriam Ziegler and Severin Kiefer, finished third in the free skate (123.26). Their routine to an Adele medley featured side-by-side triple Salchows, a throw triple flip, and throw triple Salchow. They moved up from fifth to fourth overall (187.01).