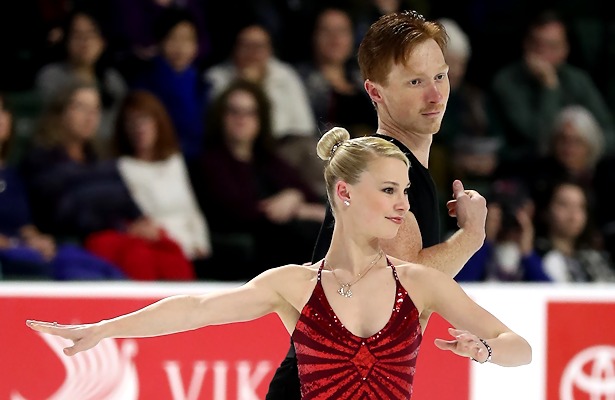 Evgenia Tarasova and Vladimir Morozov of Russia improved their season’s best by over five points in the Short Program at 2018 Rostelecom Cup.

Russia’s Evgenia Tarasova and Vladimir Morozov currently lead the Pairs after the Short Program at 2018 Rostelecom Cup. Nicole Della Monica and Matteo Guarise of Italy are in second, followed by Russia’s Daria Pavliuchenko and Denis Khodykin. All five top teams all earned a new season’s best score in this event.

Tarasova and Morozov were flawless in their funky soul routine to “I Got You (I Feel Good)” by James Brown, nailing a level 4 triple twist, side-by-side triple toes, and a throw triple loop. The 2018 Skate America champion also earned a level 4 on their spin, death spiral and lift to score 78.47 points.

“We did a good job tonight,” said Morozov. “All our elements had a good level. Even though it wasn’t our maximum yet, we’re on the right path.”

“We are very happy, we skated clean,” said Della Monica. “We missed some levels here and there, but we’re working on them and hopefully in our next competition, we’ll get all level four.”

Pavliuchenko and Khodykin scored 69.38 points for their routine to “When Winter Comes” in which all elements were graded a level 4 except for the death spiral (level 3). The 2018 GP Helsinki bronze medalists produced a triple twist, side-by-side triple toes, and a throw triple flip.

“We’re pleased with our performance today, but there is always something to improve,” said Khodykin. “We’ll look at that later. Now, we’ll focus on the free skating.”