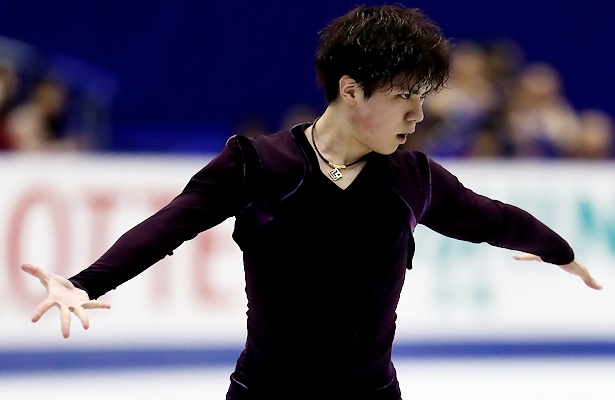 Despite a stumble on the back end of a quad toe loop-triple toe loop combination, Japan’s Shoma Uno leads after the Men’s Short program at the 2018 NHK Trophy on Friday in Hiroshima, Japan.

Skating to “Stairway to Heaven,” Uno racked up 92.49 points and dazzled the home crowd with an opening quad flip. Just one point behind him is defending champion Sergei Voronov of Russia, who earned a season’s best of 91.37 points in a Rachmaninov program.

“It was a pity,” said Uno of the mistake, “but I did everything else, and that’s competition. I tend to over-rotate in competition, so I’ve done this so many times. I know this jump was prone to make mistakes. Changing my mistakes into a success is something I need to work on.”

“There’s not something new I should be doing at this moment,” added the 2018 Olympic silver medalist. “I just need to focus and do my best. I think in future competitions, we’ll know. I can’t use the excuse of under-rotating. The quickest way is to bring the toe loop in the end, and the quad-triple combination could be the change for me.”

Uno, who is competing in his first NHK Trophy event, defended his Skate Canada title with 20 points to spare several weeks ago.

Voronov gave a solid performance to which featured a quad toe-triple toe combination as well as good spins and footwork. The veteran skater improved his score by over 13 points since his bronze-medal win Skate America earlier this season.

“It was tough to skate after Shoma,” said the skater who turned 31 last month. “It’s nice to skate after one of the best skaters in the world. Given my age, I think I am doing well. The music is something I like, and I know there are fans cheering for me, so I was able to give back to the fans.”

“When I selected the music, there’s a lot of emotion and expressions in it,” explained the two-time Russian champion. “I feel the emotions of the music. The younger skaters, I hope they have a long and prosperous career.”

In third after the short program is Russia’s Dmitri Aliev, who scored 81.16 points. Aliev executed his initial quad toe splendidly, but fell on an ensuing triple Axel which was under-rotated.

“I’m not that satisfied with all of the elements,” said Aliev, “but with my emotions, I’m totally satisfied. I missed the triple Axel, but tomorrow is a new day.”

Matteo Rizzo of Italy scored 77.00 points after under-rotating the back end of a triple flip-triple toe combination and is in fourth place.

“I didn’t really prepare,” said the 18-year-old. “I injured myself, and I actually didn’t skate the entire week before I came here. So, that’s why I am very thankful that I have a chance to compete here. I didn’t do what was planned, but I did it decently well for what I am able to do right now. I am happy with myself for pushing myself. I just want to get to the free skate and do what I can and then go home and get healthy, train, keep my head up, and try not to lose my spirit.”