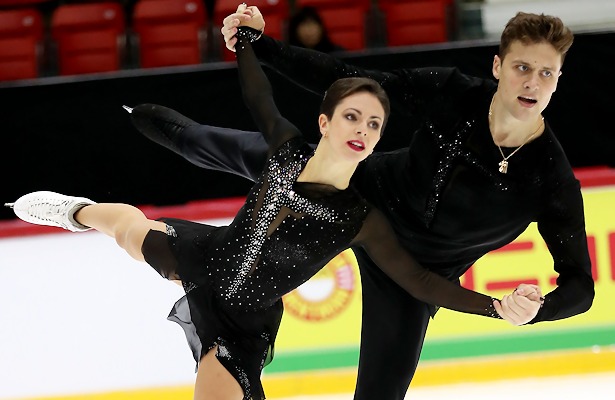 Zabiiako and Enbert had a fall in their side-by-side triple Salchows, and the landing of the throw triple flip was shaky, however, their routine to “Toi et Moi”by Igor Krutoi was otherwise clean. The 2018 Lombardia champions produced a strong triple twist and difficult level 4 lifts, as well as a throw triple loop and side-by-side triple toe-double toe-double loops to earn a season’s best of 130.92 points.

“We were satisfied with the skating, said Zabiiako. “It was not one hundred percent clean, but emotionally everything was good.”

“We want to thank everyone in the audience for their support,” said Enbert. “It was not so easy but today was a very important day for us. This is kind of unusual for us because we usually skate the short program much better. Today was really hard but it was good and we are really happy.”

“It means a lot to us to have won our first Grand Prix gold medal. It was a good experience for us,” Zabiiako said. “We are happy we got first place here.”

“It’s our first time at a Grand Prix,” said Enbert. “It was a little bit harder but we are happy.”

Overnight leaders Della Monica and Guarise also earned a new season’s best for a third-place finish in the free skate (117.59), but with a total score of 185.77, slipped to second overall. The 2018 Lombardia Trophy bronze medalists showed a solid triple twist and two strong lifts, however, there was a touch down on the throw triple loop and one of the side-by-side Salchows was doubled.

“Today was a very fun program for us,” said Guarise. “We enjoyed the skating and made people laugh. Our goal is to be happy and to make people happy.”

“This is our first silver medal on the Grand Prix,” Della Monica said. “Last year we won our first medal, a bronze, so we are happy that we improved. Next time it maybe will be gold, who knows. It shows that we are on the right track. Our next Grand Prix is in Moscow, so we have one week to work a little bit more on our mistakes.”

“We are starting to enjoy the competition, even with pressure,” added Guarise about competing in the Grand Prix. “We start to enjoy the moment.”

Pavliuchenko and Khodykin delivered side by side triple flips (edge call) as well as a triple toe-double toe-double toe combination, in their routine to “The Great Gatsby.” The 2018 World Junior champions also produced a strong throw triple flip and loop and earned a level 4 on the triple twist to finish second in the free skate (121.81) and third overall (185.61).

“We really enjoyed this competition, the moment,” Pavliuchenko said, while thanking everyone for their support. “The audience was great. We skated well, but we had some mistakes and we hope we’ll skate better next time.”

“We are happy about our first medal in the Grand Prix, but this is only the first step in our skating,” Khodykin added. “We will work more and more.”