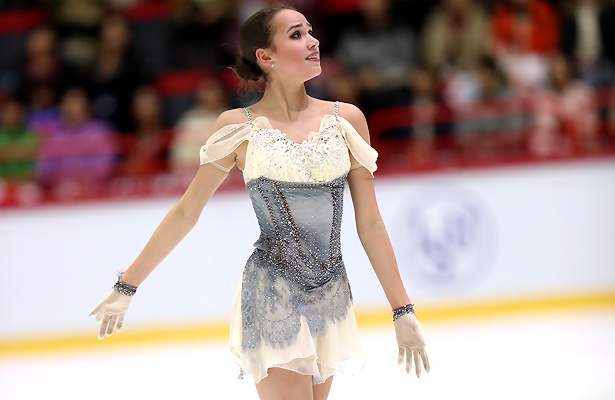 Alina Zagitova of Russia broke the 80-point mark in her Short Program, setting a new record at 2018 Rostelecom Cup.

In her expressive routine to music from The Phantom of the Opera, Zagitova landed a triple Lutz-triple loop, double Axel, and and a triple flip (with both arms over her head). The 2018 GP Helsinki champion also produced strong level 4 spins and footwork with high grades of execution (GOE) to earn 80.78 points.

“Today before the short program, I only thought about my program and after the program I was a little bit happy, but tomorrow is still another day,” the 16-year-old said. “The scores or my placement are not important for me. For me it is only important to skate clean and to put my heart into it.”

Samodurova of Russia flourished all three of her triple jumps with an arm over her head in her playful tango to “Nyah” from the Mission Impossible 2 soundtrack. The 2018 Skate America bronze medalist landed a solid triple flip-triple toe and triple loop and double Axel, showing strong spins and footwork throughout to earn 67.40 points.

“This is the best score I ever had and one of the biggest events I’ve competed in,” said Samodurova. “Compared to Skate America, I felt more confident today and I felt that I was able to give a strong performance.”

Paganini earned 63.43 points for her tango routine to Piazzolla’s “Yo Soy Maria,” which featured a triple Lutz-triple toe, triple loop, and double Axel.

“I am really happy with my performance,” the Swiss Champion said. “This is the best I’ve skated ever. I have been working hard on making sure all my programs are consistent and clean and on getting all my levels up. I am a little surprised to be in third, but I was working hard and I was doing clean programs in practice every day.”

Russia’s Elizabet Tursynbaeva landed a triple Lutz and double Axel, but doubled a triple Salchow combo and currently sits in fourth with 61.73 points.

Returning to the ice after a year hiatus, USA’s Gracie Gold, who is now coached by Vincent Restencourt, Pavel Filchenkov, and Irina Yakoleva, finished in 10th place (37.51). The  two-time U.S. champion doubled a triple Lutz in combination with a double toe, fell on a triple flip, and popped a double Axel.