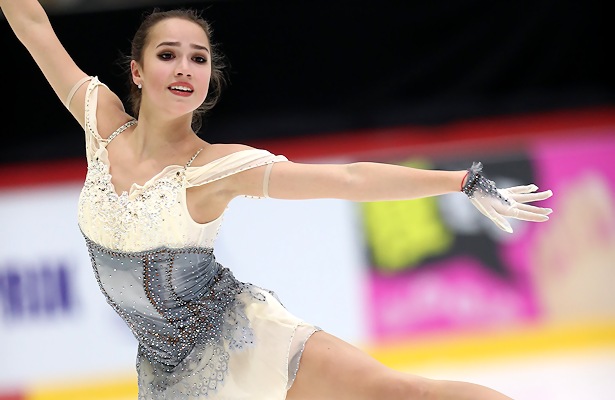 Alina Zagitova of Russia took the lead in the Ladies’ event at 2018 GP Helsinki, while Japan’s Yuna Shiraiwa and Loena Hendrickx of Belgium are currently in second and third, respectively.

Zagitova uncharacteristically popped the back end of her triple Lutz-triple loop combination, but was otherwise solid in her routine to “The Phantom of the Opera” by Andrew Lloyd Webber. The 2018 Olympic gold medalist earned high grades of execution (GOE) on all other elements which included level 4 spins and footwork, and placed first with 68.90 points.

“Today it felt a little tight, there were a lot of thoughts on my mind,” said the 16-year-old of the mistake on the combination jump. “But I really should be able to compensate that and be able to have more confidence.”

“I knew the season would be quite tough after the Olympics,” said Zagitova, who has grown about two inches since. “It’s never easy after the Olympics, especially emotionally, but I had two weeks of vacation and after that, I went to the training camp and prepared for the season.”

When asked about her short program, the Muscovite replied: “At first I didn’t understand it so much, but then my coaches explained it to me. Now I got into the character.”

Shiraiwa landed a triple Lutz-triple toe, but received an edge call on the Lutz. The 2018 Asian Open silver medalist also was a tad uncentered on her flying sit spin, but was otherwise clean and was awarded a season’s best of 63.77 points for her upbeat routine to “All Aboard,” which was choreographed by by Tom Dickson.

“I was really happy to be able to do the combination jump,” said Shiraiwa. “That was the focus for this season, so I was very happy after I cleared that combination.”

“The story is that I’m a member of the crew of a vehicle,” explained the 16-year-old of her routine. “[The] audience is my passengers and I try to guide them well.”

Hendrickx is in a close third with 63.17 points after her routine which featured strong level 4 spins and footwork, however, the 2018 Nebelhorn Trophy bronze medalist underrotated two of her triple jumps.

“It wasn’t perfect, but I think I can be very happy because I had to withdraw from Skate America because of illness,” said the Belgian champion.

The skater from Arendonk admits she doesn’t have a lot of competition in Belgium, but says it’s hard to train alone and get the motivation.

“For my short I had a different song first, but my brother Jorik came up with this song,” said Hendrickx of her short program. “It’s more powerful and I like more powerful music.”

Stanislava Konstantinova of Russia also produce strong spins and footwork, as well as a triple Lutz-triple toe, but fell on a triple flip. The 18-year-old finished fourth (62.56) in her Grand Prix debut at this event.