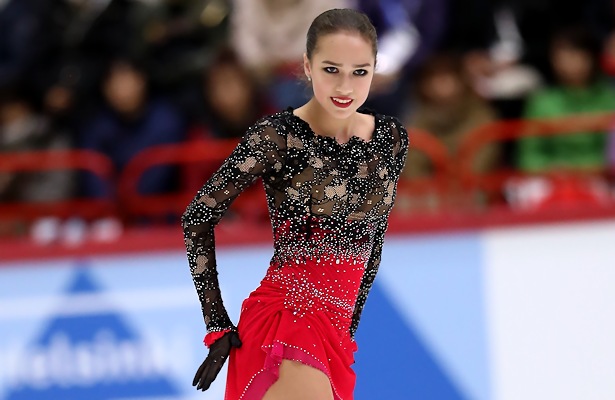 Alina Zagitova of Russia qualified for the 2018-19 Grand Prix Final after winning gold at 2018 Rostelecom Cup.

Alina Zagitova of Russia won gold at 2018 Rostelecom Cup on Saturday night, remaining undefeated in her third event of the season. Teammate Sofia Samodurova maintained second overall to win silver, while Eunsoo Lim of South Korea edged out Alexia Paganini of Switzerland for the bronze.

Zagitova had a strong start in her technically-packed routine to Carmen, landing three solid triple jumps, but under-rotated the first jump of her last two combination passes and two-footed the landing in what was supposed to be a triple flip. The 2018 Olympic champion showed strong level 4 spins and footwork throughout her routine, earning 142.17 for a first-place finish in the free skate and overall (222.95).

“I can’t say that my performance was that good today, but I am glad that I was able to pull my combinations together,” the 16-year-old said. “On the last jump, I made a stupid mistake and I will keep working.”

Skating to music from the Burlesque, teammate Samodurova under-rotated the back end of a triple flip-triple toe, but was otherwise clean, landing a total of six triple jumps. The 2018 Skate America bronze medalist earned a level 4 on her two final spins and was awarded 130.61 points for second place in the free skate. With 198.01, overall, the skater won her second Grand Prix medal of the season.

“I am happy that I was able to skate two clean programs,” said the 16-year-old from St. Petersburg. “There were some mistakes, my skate was not so clean, and this motivates me to work even harder.”

Lim finished in third place with a new season’s best of 127.91 after her jazzy routine to music from the Chicago soundtrack. The 2018 U.S. Classic silver medalist was nearly perfect, landing a total of five clean triple jumps. The only flaw was an under-rotated triple flip. With a score of 185.67, the student of Rafael Arutyunyan was able to capture the last spot on the podium.

“I didn’t do my best performance, but I tried to do better than in the short program,” said the 15-year-old. “I have to skate better in my next competition, but overall I am satisfied. This season is really important for me, because it is my first senior season.”

Alexia Paganini of Switzerland gave a delightful routine to music from La La Land, which featured five clean triple jumps, and finished fifth (119.07) in the free skate and fourth overall (182.50).