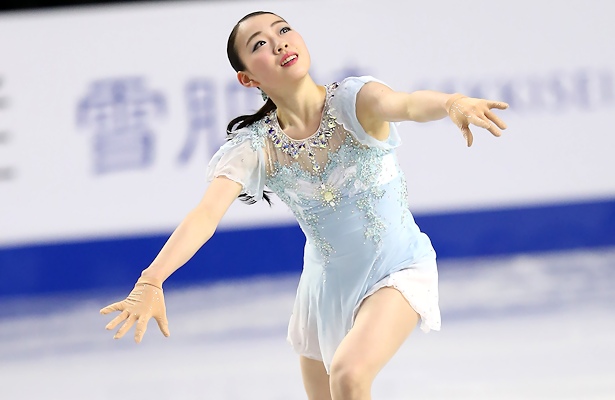 Rikia Kihira of Japan performs her Short Program at the 2018-19 Grand Prix Final of Figure Skating.

Japanese sensation Rika Kihira continued to galvanize herself as the sport’s new ‘it girl’, winning the Grand Prix Final Ladies Short Program in style with a sharp triple Axel and personal best score of 82.51. The skater, who remains undefeated this season,  also landed a triple flip-triple toe and triple Lutz with her arms over her head during her routine set to “Claire de Lune.”

“I was extremely surprised when I saw that score,” said the 16-year-old, “because it was not a score that I would have imagined would ever come up. Right now, I’m just really happy. The only thing for me to do right now is to imagine what the free program would be like.”

“Now I feel confident that I can do the same again in competition,” said the skater from Nishinomiya regarding her triple Axel. “For the free program, my goal is to land all my jumps cleanly and I will do my best to ensure it. I don’t want to have any other regrets. Now that I’ve received such a score in the short, I need to complete my free successfully as well. That’s all I would like to focus on for now.”

2018 Olympic Champion Alina Zagitova settled for second place (77.93 points) with a technically impressive and dramatic program set to “Phantom of the Opera.” The defending Grand Prix Final champion nailed a triple lutz-triple loop combination and triple flip with her arms over her head. However, her double Axel from a difficult bracket entry featured a slightly labored landing.

“I was somewhat tense, very focused and I was nervous,” the 16-year-old admitted. “I completed all my elements, but I didn’t do them as easily as I could have done them. I didn’t skate so cleanly and I can skate better than that. If I skate better, I can get more points.”

Elizaveta Tuktamysheva continued her comeback this season with a respectable short program outing to finish third with 70.65 points. The Russian saved her under-rotated triple Axel landing with a three turn at the end and went on to nail a triple toe-triple toe  combination and triple Lutz. Her flirtatious and sensual routine to “Assassin’s Tango” was a stand out among the rest of the flight.

“I am very happy to be back, this is a big accomplishment,” said the skater who trains under Alexei Mishin.

“Well, we are not robots, I was a little bit tired,” she added in explanation for the miss on her triple Axel. “This time also, I am not as fresh due to jetlag, as I was during previous performances. But I am happy that despite being tired, I fought and this was probably one of the most difficult performances for me in this season. Which is why I am happy that I still performed the Axel, and other elements.”

Despite clean jumping, including a triple flip-triple toe loop combination, Japan’s Kaori Sakamoto of Japan gave away some levels on her spins to finish in fourth place with a score of 70.23.

“I was so nervous but I am glad I was able to complete it fully,” she said of her routine set to music by Charlotte Church. “There were only six people in the competition, so I believed that this place was where I could figure out where I stand. Also, a place like this challenges me to overcome my challenges. If I successfully compete in a competition like this, I will be able to gain confidence for the Nationals that is coming up soon.”

In her debut Grand Prix Final, Sofia Samodurova finished in fifth place with a short program score of 68.24. During her Latin routine, the Russian performed a triple flip-triple toe loop combination.

“I am happy, this is the best result in this season’s short program,” said the Rostelecom Cup silver medalist. “I am happy I was able to collect myself and do the elements well, showing a good skate.”

“I am in a fighting mood, as always, but I can comment on the final itself after the free program,” said Samodurova of her Grand Prix Final debut and heading into the free skate. “We will keep the elements as planned, but we cleaned up the program a bit.”

Japan’s Satoko Miyahara was disappointed with her skate and finished in sixth place with a score of 67.52. In her short program performance to “Song for the Little Sparrow,” the 2018 World bronze medalist under-rotated her opening triple Lutz and later managed only a double toe loop  on the back end of a triple toe.

“It was not a good performance at all,” she said. “Since I came here, I wasn’t able to land my jumps successfully. For the free program, I need to do whatever I can to do my best.