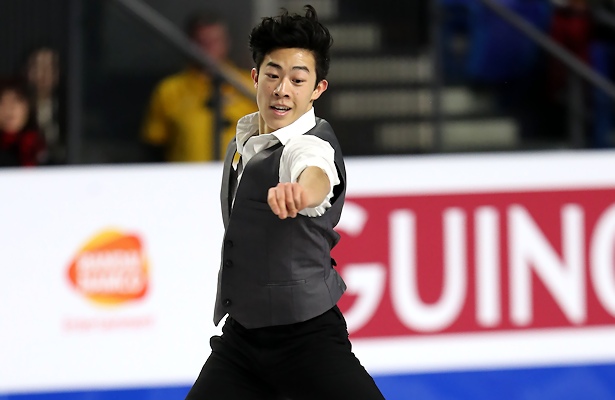 With his jazzy “Caravan” routine and helped by a beauty of a quadruple flip, American Nathan Chen squeaked out a win over Japan’s Shoma Uno in the 2018-19 Grand Prix Final Men’s short program, impressing the fans from Vancouver, Canada.

Though classically dressed in black pants, white shirt and a grey vest, the outing wasn’t classic Chen. The 2018 World champion struggled on his planned quadruple toe loop-triple toe loop combination when he fell out of the first jump. He still earned a season’s best of 92.99 points for the effort.

“That was something I did not want to lose out on this time,” he said of his strong levels, which edged out Uno, but were not as high earlier in the season. Chen earned level four grading and high grades of execution on all his spins and footwork.

“I spent a lot of time working on that in practices so I’m glad that they came out today,” said the 19-year-old. “The toe was something that was really silly and I shouldn’t have made that mistake. I lost a lot of points because I missed the combo obviously, but overall, the program itself is going in the right direction and hopefully over the period of this season, I will be able to improve on it even better.”

“The free is the most important thing now,” Chen said, looking forward. “What I did in the past stays in the past. I can’t change what I did, so I just use what I did here and evolve from what I did.”

“I’m definitely not going to attempt what I was doing last season,” he added of quads heading into the Free Skate. “I think it’s, as of now, a better call to play it a little safer, cleaning up the program.

Japan’s Shoma Uno was bewildered by his troubled short program routine which included an under-rotated quadruple flip and only a double toe loop as the second jump of his quad toe combination. Skating to “Stairway to Heaven,” the 2018 Olympic silver medalist managed the highest program component scores of the night with his ethereal on-ice presence. He finished the in second with 91.67 points.

“I couldn’t do anything what I trained for in Japan,” said the 20-year-old from Nagoya. “Today at the practice, both in the morning and the six minutes warm up, I couldn’t jump properly. I am not ill or injured. I have absolutely no excuse as to why I couldn’t jump. I wish I could say there was a reason. The fact that I could do everything well in practice and couldn’t do in the competition probably means that the mental side is part of the problem and is my weakness.”

Continuing his comeback, Michal Brezina of the Czech Republic landed third with 89.21 points. In his expressive performance to Who Wants to Live Forever, the fan-favorite managed a quadruple Salchow-double toe loop combination and a steady triple axel.

“I think it wasn’t bad overall,” the three-time Olympian reflected on his skate. “The quad-triple combination was not great, but the rest was good. It’s been seven years since my last Final. I am lucky enough to be able to make it this time to the top six to skate in such a prestigious competition. Before, I lost my motivation and drive and it went down from there, but this time it’s a little bit different.”

“I’m feeling good,” said Brezina of heading into the Free Skate. “I just have to do my job, show what I practiced. I have no particular goal for tomorrow. Just to skate well and enjoy my time here.”

Korea’s Junhwan Cha continued his ascension in men’s skating with a solid and dramatic short program set to “Cinderella” that featured a triple Lutz-triple toe loop combination and triple Axel. However, the skater, who won bronze at his two grand prix events this season, under-rotated his quadruple Salchow and finished in fourth with 89.07 points.

“It was kind of exciting,” he said of his senior Grand Prix Final debut. “I was a bit nervous too, but I really tried to control myself and skate calm. I think that was kind of a satisfying performance today.”

Russian Sergei Voronov finished in fifth with his program set to Rachmaninoff. The NHK silver medalist managed a tight landing of the quadruple toe loop to open his otherwise clean, though subdued, routine.

“The judges are the one who give the scores, and not me,” he said of his score of 82.96 points. “I would probably give myself a higher score, but I am not a judge, and well, there were little short-comings during the program. But overall, I am happy with my performance.”

Canadian Keegan Messing, a stand in when two-time Olympic champion Yuzuru Hanyu withdrew, was animated in his “You’ve Got a Friend in Me” routine which continued off the ice. An under-rotated triple Axel and quadruple toe relegated the 2018 Olympian to sixth place with a score of 79.56.

“The home crowd definitely helped things, they are so supportive,” he of the roaring fans. “Every time you are in front of the Canadian crowd, it’s just wonderful. I definitely fought for every single element our out there. My legs just felt a little shaky and I rushed my take-offs just a little bit. I really had to fight for every little thing out there. It was not as solid as I was hoping for, but I stayed on my feet and I can be proud of this.”

“The plan for tomorrow (Free Skating) is to take everything one step at a time,” Messing added. “The goal is to go out and to have fun. We already qualified for this event, it’s my first time here, so honestly, the big goal here is to leave happy and to skate well.