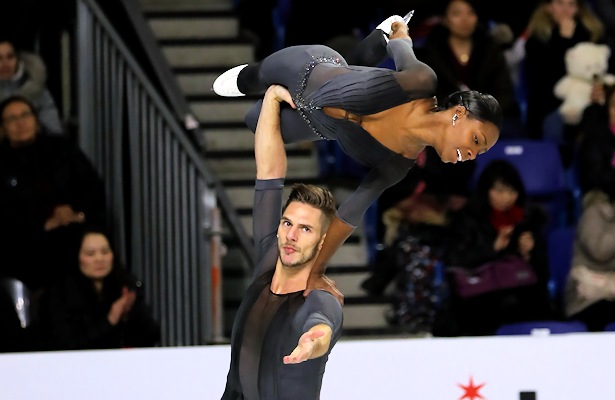 Vanessa James and Morgan Cipres of France perform their Free Skate at the 2018-19 Grand Prix Final of Figure Skating.

In their first and long-anticipated Grand Prix Final, Vanessa James and Morgan Cipres of France won gold with a contemporary free skate that gave goosebumps and earned a standing ovation from the crowd in Vancouver.

Skating to “Wicked Game” and “The Last Feeling,” the 2018 World Championship bronze medalists put a lackluster short program behind them to land every high-risk element in their free skate, including side-by-side triple Salchows, a soaring throw triple twist and a solid throw triple flip and Salchow. The team earned 148.37 points for the glorious effort and finished the event with 219.88 points.

“It’s kind of weird this year, because every season we meet them in every competition, at the Grand Prix, every where actually,” said Cipres about fact that this was their first meet up against the top Russian pairs and speculating that the much-anticipated showdown left them rattled.  “To have this week the first time we met them, it was weird. I just like this fight. I was disappointed yesterday because we know we can beat them and we missed it yesterday.”

“I don’t want this anymore,” said James of their ‘bad short program followed by a strong long program’ cycle this season. “Having this long program so solid and strong will just help when we have a good short program. I know we have to fight every time after our short program to make up the points, but feeling more free and not having to try and try to make a comeback, I think will just liberate us a little bit more, I am hoping.

China’s Cheng Peng and Yang Jin won the silver medal, following up their short program win with a solid performance in the free as well. In their driven program set to “La Vie en Rose,” the 2018 Olympians doubled their opening Salchows, but executed the rest of the program’s elements including side-by-side triple toe-double toes, an impressive triple twist, and a throw triple loop and Salchow.

“The toeloop was not that good, but we did the other elements well,” said Peng. “I had twisted my right leg before, but the doctors helped me and so I was able to perform.”

“After the Olympic season, we were both pretty down,” Jin said of his team’s improved competitive record this season. “Last year, we did a lot of preparation hoping to have a good Olympic result and we hoped to perform the best we could, but we didn’t. So after, we both got mature and we got better in our study of the training and competition. This year, we try to focus more on the quality.”

Russians Evgenia Tarasova and Vladimir Morozov continued to struggle in this competition with a step out on the throw triple flip and a botched three-jump combination during the free skate. The 2016 Grand Prix Final champions managed the night’s highest triple twist and a secure throw triple loop during their soulful performance set to “The Winter” by Balmorhea. The judges awarded a score of 140.16 in the free skate and they earned 214.20 points overall.

“Today I had one mistake on the throw,” noted Tarasova, “but overall, the skate was done well, the program was done well. Some points of the program I was a little clumsy, but today I am happier with my skating than I was yesterday.”

“The free skate was not perfect,” Morozov agreed. “I would actually say below average if we judge by the scores. We started well, had a little mistake on the first combination. I overturned a bit on the first jump so I had to make the second jump a single so that we were in sync for the third jump. After that, we did the throw and Zhenia didn’t manage the landing well. And after that, the program was a little clumsy. And one thing led to another. We just didn’t think it was the best performance that we could have given. But overall, after a couple of simpler elements, we tuned back into the program, did a good throw and managed the support well.”

Teammates Natalia Zabiiako and Alexander Enbert also struggled in their passionate free skate to “Toi at Moi” by Igor Krutol. The 2018 European Championships bronze medalists marred the side-by-side triple Salchows when she under-rotated hers and landed on two feet. They also missed the execution of their Axel lift. The team earned 125.89 in the free skate and 201.07 points overall

“Every mistake is disappointing, without the mistakes we would have been happier,” said Zabiiako. “It’s hard to say right now what had exactly happened. We will review the video. We got un-synchronized at some point, it’s complicated now to say. For us to get to the Final is very pleasant. I think it is one of the most important competitions of the first half of the season, probably some parts of our program were not quite ready yet, but we will improve them.”

Italians Nicole Della Monica and Matteo Guarise were not able to harness the momentum generated this season to produce a competitive free skate. The 2014 and 2018 Olympians had two falls and Della Monica doubled the opening side-by-side Salchow. Despite tender moments in their “Tristan and Isolde” program, the mistakes were too great to earn them anything more than 117.86 points. The team finished in fifth place with 187.63 points overall.

Russia’s Daria Pavliuchenko and Denis Khodykin encountered opening difficulties in their animated “The Great Gatsby” free skate, botching landings of the side-by-side triple flips with unsynchronized timing and underrotations, but rallied to execute the remainder of their high-risk elements smoothly, including a throw triple flip and throw triple loop. They earned 125.57 in the free skate and 186.81 points overall.

“In general, everything we wanted to do we did,” said Khodykin. “Yesterday we didn’t skate quite well, today as well. Would have been nice to add more charm to the skating for a higher GOE. Being in the Grand Prix Final is already a huge achievement for us. Next, we need to work more and more, set new goals for ourselves.”

“We need to keep working and working harder,” Pavliuchenko added. “We will do our best to get ready in time.”