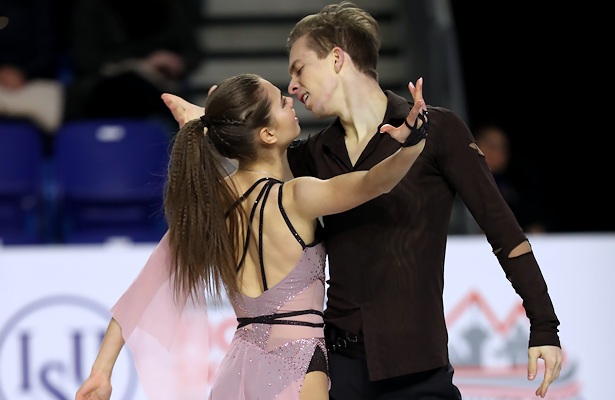 Sofia Shevchenko and Igor Eremenko of Russia maintained their overnight lead to win the Junior Ice Dance event at the 2018-19 Junior Grand Prix after the Free Dance on Friday afternoon in Vancouver, BC. Teammates Arina Ushakova and Maxim Nekrasov missed the top of the podium by a mere .01 point to take the silver, while Elizaveta Khudaiberdieva and Nikita Nazarov maintained third to with the bronze.

Ushakova and Nekrasov won the free dance with 103.16 points after their difficult, yet theatrical performance to music from the Black Cat, White Cat soundtrack in which they stayed in character throughout. The Russian junior bronze medalists earned positive grades of execution (GOE) for all elements which included a level 4 twizzles, lifts, and dance spin, as well as a strong level 3 diagonal step sequence. They scored 170.65 overall, just missing the gold medal.

“We are pretty happy with our performance this time,” said Ushakova. “There was definitely some mistakes that we will be working on and taking care of at home. It’s definitely not the result we were hoping for, but life is life and today there is one winner, tomorrow there is another one. It is what it is, and we will work on our mistakes.”

Shevchenko and Eremenko showed a strong and fast transcendent routine which featured two level 4 lifts, twizzles, spin, and solid level 3 one-foot step sequence. Their diagonal steps were graded a level 3 and all elements received good GOEs. The Russian junior silver medalists scored a new season’s best of 102.66 for second place in the free dance, but finished first overall with a combined score of 170.66 (SB).

“Right now we are on an emotional high and it is hard to give a clear evaluation (of the skate), but overall it was a good skate,” said Shevchenko. “We are happy with the scores. We will need to look at the technical score breakdown later to see what we need to work on in the future.”

We’re in a kind of shock now and we go around glassy-eyed,” said Shevchenko of their win. “We haven’t realized it yet. Sport is such a thing – one time you’re at the top and next time you’re at the bottom. This is our first major victory.”

“It was so close with 0.01 points difference,” noted Eremenko. “It was worth the fight. We worked really hard for this competition, and we really wanted to show the kind of skate that we are able to show to our coaches during practice. Competition always brings worries and stress, it is a little different than training – which is why we were striving to relax and to show what we are truly capable of. We believe that it was not a hundred percent of what we could have done, but we have definitely gotten closer to that goal.”

While the ice dancers don’t have role models, per se, they look at how other skaters perform and see the advantages and disadvantaged of their skating.

“We always try to take something away from the leading pairs in order to advance ourselves,” said Eremenko.

Khudaiberdieva and Nazarov put out an energetic and bluesy routine to  “Human” by Rag’n’Bone Man and “Nemesis” by Benjamin Clementine which featured a level 4 stationary lift, straightline lift and twizzles. The Tallin Trophy junior champions, who are coached by Denis Samokhin and Maria Borovikova, showed intensity throughout and were awarded a season’s best of 98.25 to finish fourth in the free dance, but maintained third overall with a total score of 164.54 (SB).

“0.03 is a very small difference (to Lajoie/Lagha),” observed Khudaiberdieva. “When we first saw the score and the placement for the free skate, we were upset a little bit thinking that we would not make it to the top three. But it turned out to be different that we made it, and we will get a medal.”

“Before the start, there was some type of nervous excitement,” said Nazarov. “I don’t know about Lisa, I was really worried. But once I stepped on the ice, I was feeling very confident. It was very pleasant to skate. We had really good support, our friends, and fellow peers from different countries.”

Two-time Canadian junior champions Marjorie Lajoie and Zachary Lagha displayed good expression throughout their performance to “Warsaw Concerto” by Richard Addinsell which featured solid level 4 twizzles and stationary lift, however the team received a one-point reduction for an extended rotational lift that was otherwise awarded high GOEs. They finished third in the free dance (98.26) and fourth overall (148.76).

“It’s our second time at the Junior Grand Prix Final,” Lagha pointed out.

“We have Nationals and then (Junior) Worlds,” said Lajoie of their upcoming events. “We’ll try to focus more on the technique. Emotionally, it was really good, but technically we need to work on it a little bit.”

USA’s Avonley Nguyen and Vadym Kolesnik showed good flow and consistent speed throughout their routine to “Demons” by Imagine Dragons and “Experience” by Ludovico Einaudi. The JGP Ljubljana champions displayed strong one-foot steps and both level 4 lifts earned high GOEs. The team, coached by coached by Igor Shpilband and Pasquale Camerlengo, finished fifth in the free dance (94.74) and overall (158.47).

Their goals are to try to win everything in the next competitions they attend.

“We have nationals next,” Nguyen said. “Of course we want to perfect everything technically because here, it wasn’t the best for us. We always want to strengthen our connection as always to make everything smoother and just flow much better.”

Maria Kazakova and Georgy Reviya of Georgia put out a smooth routine to “Carmina Burana” and “Vocalise” in which the diagonal steps were only graded a level 2, but the level 4 straightline-rotational lift was cleverly placed to the dramatic music and the Volvo Open Cup Champions showed good level 2 and 3 one-foot steps. They scored 91.25 for a sixth-place finish in the free dance and overall (148.76).