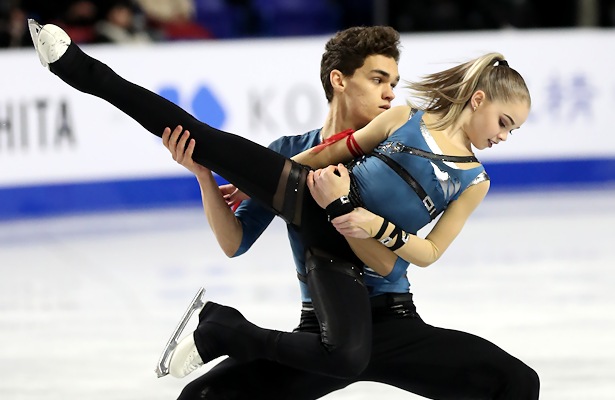 Polina Kostiukovich and Dmitrii Ialin of Russian perform their Short Program at the 2018-19 Junior Grand Prix Final of Figure Skating.

Russia’s Polina Kostiukovich and Dmitrii Ialin currently lead the Pairs after the Short Program at the 20-18-19 Junior Grand Prix Final. Teammates Apollinariia Panfilova and Dmitry Rylov and Anastasia Mishina and Aleksandr Galliamov are second and third, respectively, in this Russian-dominated discipline.

Kostiukovich and Ialin gave an energetic and flawless routine to music from the Tomb Raider soundtrack. The team from St. Petersburg delivered a triple twist, level 4 lift, side-by-side double Axels, a throw triple Salchow, and strong level 3 footwork. They scored a season’s best of 66.84 points.

“We could have performed better,” said Kostiukovich. “The elements could have been done in a better way and we can improve on some levels. There is still a lot to work on.

“We are happy with the result, but we feel there are a lot of little issues in our program and things we can do better,” his partner agreed.

Kostiukovich likes the character for “Lara Croft” and doesn’t care too much about classical choreography.

“I like a tougher character,” she said, adding that her pink rabbit is her good luck charm. “Its name is Do Do, from the English word to ‘do, because we’re always doing something. I love pink and therefore all my toys are pink.”

“This is a energetic music and the audience got into it,” said Ialin when asked about the music.

Their coach, Nikolai Matveyevich Velikov, was the one who came up with the ending pose of the routine. “He is constantly searching for something new and different and he suggested this pose to us already during the summer training camp in Sochi,” Ialin explained.

Panfilova and Rylov were also near-perfect, showing a solid triple twist, a strong level 4 lift, side-by-side double Axels, and a throw triple Salchow in their routine to “I Put a Spell On you.” The team from Perm scored a new season’s best of 66.44.

“We worked a lot after the Cup of Russia in Kazan,” said Panfilova. “We had a very long break, and thatwas visible in today’s performance.”

“Last year in Japan, the crowd was bigger, but the crowd (here) supports us well,” she added. “It is a very warm environment.”

Rylov (on GP final): If you look at it throughout the season, it is not as important, for us specifically. But we can say that is one of the important competitions.

Mishina and Galliamov, training mates of the leaders, skated to “Party Like a Russian” by Robbie Williams, produced a triple twist, throw triple Salchow, and level 4 lift, however, both skaters had to fight for the landing on the side-by-side double Axels, but showed a good level 4 death spiral and side-by-side combination spins. The CS Inge Solar Memorial Champions scored a new season’s best 64.37 points.

“We are a bit nervous because it is our first Final,” said Mishina. “We did not do all we can, but in the free program we will try to skate better. There are a lot of good pairs, so we’ll see how it goes.”

Kseniia Akhanteva and Valerii Kolesov of Russia produced a strong performance which included a triple twist, huge throw triple Salchow, sand a level 4 lift in their routine to music from Interstellar soundtrack. However, the team from St. Petersburg had an under-rotation in the  side-by-side double Axels and lost unison during the change of position on the side-by-side spins to score 62.04 for fourth place.

“Some elements could have been better,” he noted regarding the performance. “It is like during the trainings, some things can be improved.

“Overall we are happy with our performance, but our spin was not a parallel change,” noted Akhanteva. “We will try better next time.”

“Very warm and nice feelings, there are so many people in the tribunes,” said Kolesov of competing in Vancouver. “It is our first time performing on such a big event. We have always wanted to perform at the big arenas (events) which have big crowds. Unfortunately, the tribunes were not completely full, but everything is ahead (in the future).

“It is more pleasant to have bigger crowds watching,” his partner agreed. “You feel more comfortable because you feel that people support you.”

“It is a big experience for us, to see how the seniors skate, in other words, best skaters in the world,” Kolesov responded regarding their first time at the GP final. It is very interesting.

Three teams at this event are coached by Ludmila Velikova, Nikolai Velikov and Vasilii Velikov.

“We get enough attention from (the coach), and we can not say anything about that,” said Kolesov. “Each pair gets their fair share.”

Skating to “Rain, In Your Black Eyes” by Ezio Bosso, Russia’s Anastasia Poluianova and Dmitry Sopot showed a good throw triple Salchow and level 4 lift, however, they had an under-rotation in the  side-by-side double Axels and struggled with unison on the side-by-side spins to finish in fifth place with 59.28 points.

“Overall, it went well,” said Poluianova. “It was a solid skate, but for the very end of the program, it did not work out as well.”

“Well, this was the element that we were doubting, even though we worked on it the most during our training sessions,” said Sopot regarding a wobble on the spin. “I think it is because it was the last element in the short program. It was a bit challenging, emotionally and strength-wise. It just happened.

USA’s Sarah Feng and TJ Nyman are currently in sixth (49.82). Feng took a rare fall after the landing of a triple twist and then stepped out of the landing out of a throw triple Salchow. The team otherwise landed side-by-side double Axels and showed good expression overall in their routine to “Farrucas.”

“Definitely not our best,” said Nyman. “It’s just another competition for us and we didn’t give a thought about being the only U.S. team among all the Russian teams. We came here to do our performance, but it wasn’t there today. I don’t know… All we can do for tomorrow is to keep our heads because we trained well to be here.”