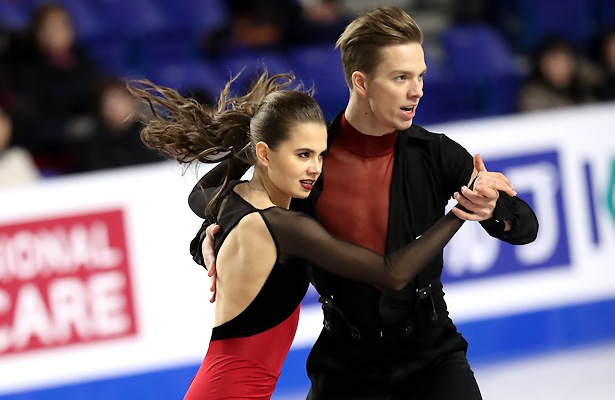 The 2018-19 Junior Grand Prix kicked off with the Ice Dance discipline for the Rhythm Dance on Thursday afternoon in Vancouver, BC at the Thunderbird Arena. Sofia Shevchenko and Igor Eremenko are currently leading a Russian sweep with teammates Arina Ushakova and Maxim Nekrasov close on their heels by a mere 0.24 point, followed by Elizaveta Khudaiberdieva and Nikita Nazarov.

Russia’s Shevchenko and Eremenko delivered a technically difficult routine which showed strong level 3 circular steps while displaying good flow and deep edges, and earned a level 4 for the twizzles and their straight-line lift. The Russian junior silver medalists earned a new season’s best of 67.73 for their tango to “La Cumparsita.”

“It is a high score and this is our record (seasons best),” noted Shevchenko. “We are very happy and we deserved it.”

The skaters felt the support of their team- and training mates Alexandra Stepanova and Ivan Bukin. “We are really happy that they were cheering for us,” said Shevchenko. “Even during the warm-up before going on the ice and during the training, we had a feeling of being at home.”

“We had a laugh,” Shevchenko added. “Their presence and cheering helped with the nerves. Sasha (Stepanova) was cheering loudly, and since she always cheered for us during the training, I could recognize her voice. It is as if we are home.”

“It is very different,” said Eremenko when asked about the difference between this year’s even and last. “The atmosphere is different from Japan. It is very pleasant to participate in Canada at the Final. We really like it here.”

Ushakova and Nekrasov showed intensity in their Tango/Flamenco in which they met six of eight of their pattern key points, the most of all other teams, and showed solid level 4 twizzles and rotational lift. The Russian Junior bronze medalists from team from Odintsovo earned 67.49 points.

“It was not our best score and honestly I had hoped for more,” said Ushakova. “We felt good in the program, we didn’t notice any errors. Tomorrow is another day. The main battle will happen tomorrow.”

Khudaiberdieva and Nazarov of Russia appeared cautious but showed good depth of edge in their tango to music by Edvin Marton. The Tallinn Trophy champions met five of their eight key points and their level 3 midline steps were awarded high grades of execution (GOE), however, Nazarov only earned a level 3 on the twizzles. The team ended with a level 4 rotational lift and scored a new season’s best of 66.29.

“It is amazing, I am in complete awe,” Khudaiberdieva said about competing in their first Junior Final. “There was some type of nervous excitement, because it is such a big event, there is a big crowd. I was shaking a bit an hour before the performance, but when I stepped on the ice and saw the big crowd who came to see our performance, it gave me confidence and a push. I became calmer, and so we were able to skate with joy.”

“When there is a big crowd, it is much easier to skate because the crowd energizes you and gives you confidence,” said Nazarov. “Surprisingly, the crowd was very supportive.”

Marjorie Lajoie and Zachary Lagha of Canada showed strong level 4 twizzles and a rotational lift, both of which earned high GOEs in their tango to music by Otros Aires. The JGP Richmond champions met five of their eight pattern key points, but their midline steps, which garnered high GOEs, was only graded a level 2. Nevertheless, they earned the highest program component score of all the teams and earned a new season’s best of 66.25 points for fourth place.

“Everyone was cheering for us, waving Canadian flags and clapping hands,” said Lajoie, who was thrilled with achieving a season’s best on home soil. “Seeing that was amazing!”

“I think we performed well, but technically we have done better before,” said Lagha. “Overall, I think it went okay.”

“We’ll just focus on our performance and do our job well,” he added regarding heading into the Free Dance. “It is more fun to enjoy the performance so we’ll do that tomorrow.”

USA’s Avonley Nguyen and Vadym Kolesnik showed good level 4 twizzles and a level 4 curve lift in their routine to music by Amelita Baltar and Luis Bacalov. The team who trains in Novi, Mich., under Igor Shpilband and Pasquale Camerlengo, also showed good level 3 midline steps and were awarded 63.73 points for a fifth-place finish.

“We are happy with our performance from today,” said Nguyen. “We could have done better, but we are proud of what we put out there. We are just happy we got here, because that was our goal at the beginning of the season, to make it to the Final.”

Kolesnik just arrived on Wednesday due to a delay with him getting a visa, and as a result, had less time to practice.

“Not that much, we were ready,” he said when asked if it affected their performance. “We are here not for training, we are here to compete. It’s our first Grand Prix Final. We are glad we got here.”

Georgia’s Maria Kazakova and Georgy Reviya, are the first ice dancers from their country to qualify for the Final. and are currently sixth (57.51).  Their tango featured level 4 twizzles, a level 4 curve lift, and level 3 midline steps with good GOEs.

Reviya: (on being the first Georgian Ice Dance couple to qualify for the ISU Junior Grand Prix Final)

“We are feeling ok,” said Reviya when asked about being the first Georgian Ice Dance team to qualify for the JGP Final. “We had the goal to be here, and we made it here with everyone. With our coaches and federation, we all tried hard to make it here and this is the result.”

Kazakova had cut his hand during warm up.

“It was uncomfortable, because the blood was running down my finger and I could not hold her (Kazakova) properly,” he said. “This is the first time something like that happened.”