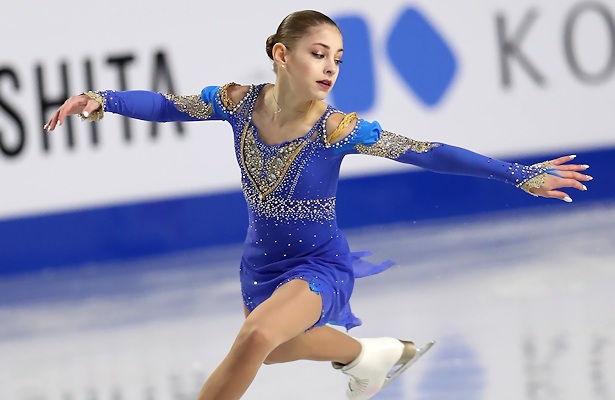 The Russian ladies dominated the Free Skate at the 2018-19 Junior Grand Prix Final in Vancouver on Saturday with Alena Kostornaia edging out teammates Alexandra Trusova and Alena Kanysheva for the title.

Kostornaia was focused in her smooth, yet powerful routine to music from the Romeo and Juliet soundtrack, landing seven triple jumps, all of which garnered high grades of execution (GOE). While the World junior silver medalist didn’t have the most technical program, she made up for it in the Program Component scores, earning level 4s on all elements along the way to finish first with a new season’s best in the free skate (141.66) and overall (217.98).

This season is very important for the skater who plans to compete at the senior level next year.

“I wanted to show a clean program,” said last year’s silver medalist. “This year was a more relaxed year. I wasn’t much nervous during my performances, and didn’t have any anxiety about going on the ice during this Grand Prix season.”

“I had a few elements that didn’t work out, including the main combo and the last jump,” said the 15-year-old of her free skate. “I’ll be working to make them better. I don’t know how to comment on the scores, because I believe I still have a lot to work on. I need to keep training.”

“I’m in the process of learning different jumps, and last season I could do a triple Axel and I was planning to put it into my program,” said Kostornaia. “Unfortunately I couldn’t do it in the season. My body went through a few changes and I now have different weight and height. Now it’s a bit harder to learn the jumps. Honestly, I’m not yet learning quadruple jumps. I need to clean up my triple jumps and then gradually increase the difficulty level.

The teen’s goal right now is to get selected to the Russian National team  and go to Junior Worlds.

Trusova delivered an explosive  routine to music from Tomoyasu Hotei and The Fifth Element soundtrack in which she tried to execute three quad jumps. The 14-year-old stepped out of the first solo quad Lutz and then under-rotated and fell on the second (meant to be a combination jump). Nevertheless, the fearless skater managed a solo quad toe, as well as six clean triple jumps, showing level 4 spins and footwork throughout. The World junior champion finished second in the free skate (140.77) and overall (215.20) to earn the silver.

“I didn’t do well on both of my (quad) Lutzes,” she noted. “Unfortunately, the first one didn’t work out, and that’s why I didn’t have a combination there. On the second one I fell, which is why I didn’t have a combination there either. But I did it (the combination) elsewhere, and my other jumps worked out. I guess that during this competition I was a bit nervous, because I have three quad jumps. I did them well during the practices and in Moscow, but today it just didn’t go well.”

For the high school student from Moscow, all competitions are important and her next goal is to prepare for Russian Nationals at the senior level.

“I will be working more on the free program, and include my quad jumps in combination, practicing them with music and I hope that would work well for me. My goal for this year is to keep practicing the jumps.”

Kanysheva produced a delicate and whimsical routine to “Dreams of a Winter Journey,” which featured seven triple jumps, however, she under-rotated the back end of a triple flip-triple Salchow. The JGP Linz and Armenian silver medalist still earned a new season’s best of 129.48 for third place in the free skate and overall (198.14).

“I’m really happy I wasn’t expecting or be able to even dream about being on the podium in this competition,” said the 13-year-old, who is coached by  Svetlana Panova and Tatiana Moiseeva. “I tried my best. I did the maximum possible and it eventually worked. I showed everything I can do except for a tiny mistake on the combination jump with the Salchow – it was definitely under-rotated. But I tried my best and I’m very satisfied with myself and the program.

Teammate Anastasia Tarakanova put out her best performance of the season thus far in her modern arrangement to “Moonlight Sonata.” The JGP Ljubljana champion landed seven clean triple jumps and also earned a level 4 on all elements. She earned a new season’s best of 128.68 to finish fourth in the free skate and overall (190.46).

“I am happy with the way I skated in the program, but when I saw the scores I was a little upset,” said the 14-year-old who trains under Evgeni Plushenko. “I thought they would be a bit higher. I was expecting a bit more from a clean skate. So I’ll need to work harder.”

“The coaches are happy – not with the scores, but with my skating,” said the teen from Moscow. “They are happy I pulled myself together after the short program and skated well. I am actually happy to even be in the Grand Prix Final. Right before I got sick and had a high fever, so I was glad that I competed through it and was able to come into the (Grand Prix) Final and compete.”

Anna Shcherbakova showed determination in her “Rondo Capriccioso” routine, but fell on both quad attempts and later under-rotated a triple Salchow. The JGP Bratislava and Canada champion finished fifth in the free skate (125.57) and overall (181.83).

“I wanted to skate clean in the free skate and not make bad mistakes,” said the disappointed 14-year-old. “I also really wanted to land my quad Lutzes, but I couldn’t do them cleanly and I fell, so I’ll try to do it next time. But I’m a little bit sad about how I did in this competition. I will try to work more and more because, I don’t want make the same mistakes.”

“I did my triples, there were some minor mistakes as well so I have to work on them,” added the skater who missed most of the last season after breaking her leg on a triple loop.

South Korea’s Yelim Kim was elegant in her flowing and classical routine to “Meditation” from Thaïs, but fell on an under-rotated triple flip and also received an edge call on both triple Lutzes. The 15-year-old landed scored 115.40 for a sixth-place finish and slipped to sixth overall (177.91).

“This first (Grand Prix Final) competition is, for me, like a higher level competition,” said the 2018 CS US International Classic bronze medalist. “I can see many audiences, and it’s interesting, but I want to have more big competitions like this, so next time I want to show everybody my best program.”

The skater hopes to compete at both the junior and senior World Championships this season.