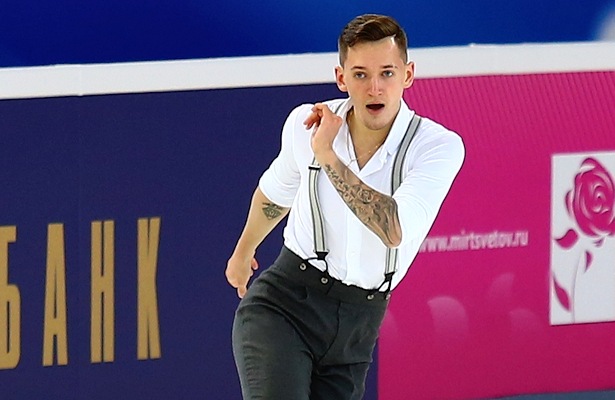 Maxim Kovtun came out of nowhere to grab a narrow lead over defending champion Mikhail Kolyada as the 2019 Russian National Figure Skating Championships opened Thursday in Saransk. Konstantin Miliukov surprisingly sits in third as other top contenders faltered. It was not a pretty competition, however, and there were many mistakes.

Kovtun started well into his playful routine to “L-O-V-E” and “Sing Sing Sing,” nailing the quad Salchow-triple toe and the quad toe combination, but then he crashed badly on an under-rotated triple Axel. Nevertheless, the three-time Russian champion picked up 95.14 points. Kovtun didn’t finish a competition last season, withdrawing from the only two events he entered after the short program (Skate America and Russian Nationals).

“This is my first serious competition (of this season),” the 23-year-old noted. The comeback did not have a perfect start as Kovtun totally botched the short program at the Russian Cup series, falling on three jumps. “When I started competing again, it was a after a long break and there were some psychological issues. I was too energized before the competition,” he analyzed.

Kolyada’s participation at nationals was unsure until the last moment. The World bronze medalist has been fighting sinusitis since the end of the summer. He apparently never fully recovered and then it came back full force just before nationals. The 23-year-old even ended up in hospital just a few days before leaving for Saransk and is obviously far from his best form. Nevertheless, Kolyada decided to compete and put out a decent performance to “I Belong to You” by Muse, choreographed by Stéphane Lambiel. He landed a somewhat shaky quad toe-triple toe, a nice triple Lutz, but stepped out of his triple Axel.

“Not everything worked, but considering the circumstances, I am pleased with it,” he stated. Asked about how he feels, he answered: “I feel strange, I don’t even know what to say. It does affect my skating, but I’m not thinking about withdrawing from the free skating.”

Miliukov skated last and turned in the cleanest performance of the day with a quad Salchow, triple Axel and triple Lutz-triple toe to score 90.05 points. That came as a surprise given that Miliukov never even made the top ten at Nationals before.

“Overall I’m pleased with my performance,” the 25-year-old said, who is originally from Kazan, but now trains in the Moscow region under former Armenian ice dancer Vazgen Azroian. “There were only some small issues with the spins and I’ll work on that. The audience was great.”

Alexander Samarin came in fourth with 83.24 points. The landing of his quad Lutz was shaky, but he hung on to it. However, the reigning silver medalist then fell on the quad toe and had no combination. He also lost points on his combination spin.

Dmitri Aliev, another medal hopeful from St. Petersburg, was a major disappointment. He fell on an under-rotated quad toe and then completely missed the take-off for his triple Axel. He sits in eighth place (71.74 points).