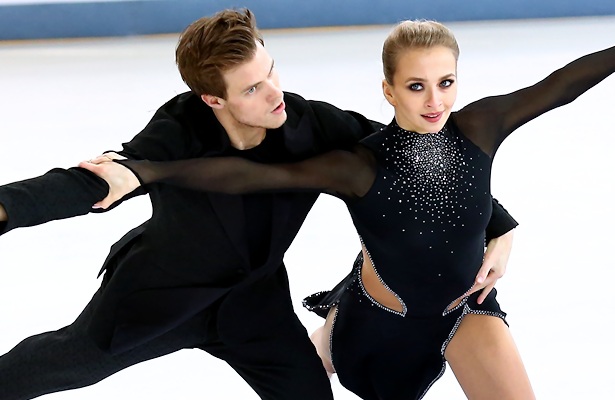 Victoria Sinitsina and Nikita Katsalapov won the Rhythm Dance at the 2019 Russian National Championship in Saransk on Thursday ahead of Alexandra Stepanova and Ivan Bukin. Tiffani Zagorski and Jonathan Guerreiro are currently ranked third.

Sinitsina and Katsalapov impressed with their characteristic and technically excellent performance to “Verano Porteno” by Astor Piazzolla. They earned a level four for the Tango Romantica pattern, their rotational lift and the twizzles, while the mid-line step sequence merited a level three. They earned 84.01 points.

“This felt like the best performance of this program so far, but we still will work to improve on it,” Katsalapov said. “We did the lift we had issues with and we got good levels for the Tango.” In the past few competitions the team didn’t achieve a level four for the lift as it was short on rotations.

Dancing to a Paso Doble and “Carmen Story” by Edith Piaf, Stepanova and Bukin delivered a very strong performance as well that included level-four twizzles and a level-four lift. The Tango Pattern Dance and the mid-line footwork garnered a level three and the European bronze medalists picked up 81.95 points for their effort.

“We are satisfied with the short dance. The coaches said it was good and we showed what we’ve worked on after the Final,” Stepanova noted, adding that they have improved in the Tango Romantica.

Zagorski and Guerreiro had drawn to skate first. The ISU Grand Prix Finalists completed three level-four elements, but the first Tango Romantica sequence was rated only a level one. The team earned 73.37 points.

“It was difficult after the Grand Prix Final to overcome the time difference,” said Zagorski. “The first night I slept well was here.”

All three teams had competed in the Grand Prix Final and were naturally the top contenders at nationals. All three said they had a hard time overcoming the jetlag after returning from Vancouver to Moscow.

The next four teams are separated by less than two points from each other and all turned in good performances. Sofia Evdokomiva and Egor Bazin from Samara came fourth with an unusual Tango and Hip Hop mix (69.87 points) followed by the energetic Betina Popova and Sergey Mozgov (69.62 points) and the 2018 World Junior Champions Anastasia Skoptcova and Kirill Aleshin (69.00 points). Anastasia Shpilevaya and Grigorii Smirnov placed seventh on 68.00 points.