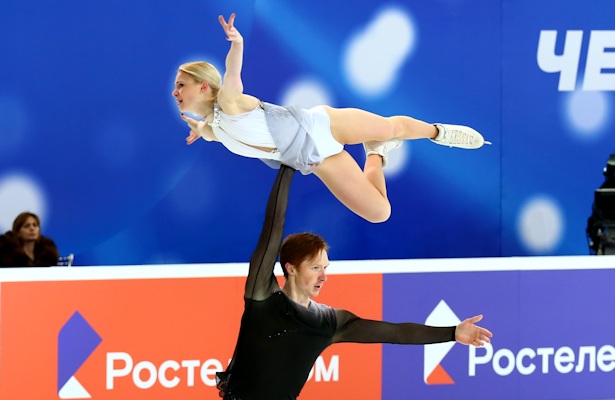 Evgenia Tarasova and Vladimir Morozov defended their title in what was a high-level Pairs event at the 2019 Russian Nationals in Saransk on Saturday. Natalia Zabiiko and Alexander Enbert took the silver medal and Aleksandra Boikova and Dmitrii Kozlovskii claimed the bronze, winning the battle of the youngsters.

Tarasova and Morozov put out an excellent performance of their program to “The Winter” by Balmorhea, reeling off a triple twist, side-by-side triple Salchow and triple toe-double toe-double toe, throw triple loop and Salchow. The World silver medalists picked up a level four for all “level” elements, such as the pair combo spin and the lifts, and scored 156.74 points. They totaled 236.80 points.

“Today we did all our elements,” said Morozov. “We made some changes since the Final and we’re happy with the result and with our performance. It was hard after the Final but we managed.” Morozov was a bit shaky on the solo jumps, but he was not feeling at his best.

Zabiiako and Enbert skated last, knowing that the teams before them had more or less all skated clean and delivered as well. Their powerful routine to “Toi et Moi” (You and Me) was highlighted by a triple twist, triple toe-double toe-double loop combination, throw triple flip and throw triple loop. The European bronze medalists earned 151.16 points and 230.49 overall to win their first silver medal at Nationals.

“We’re pleased with what we showed in the free skating. We fixed some issues from the Final and skated at a higher level here in Saransk,” Enbert pointed out. “We wanted to skate more freely, skate for the audience and the judges, and we want to continue to grow technically and artistically.”

Boikova and Kozlovskii continued their successful senior-level debut with another strong performance to “The Nutcracker.” The team from St. Petersburg, who is just 16 and 19 years old, made no mistake, hitting their triple jumps and throws and collecting level fours for their lifts, spin and death spiral. At the end, Kozlovskii celebrated like a soccer player, hitting the ice with his fist, pumping his fist and shouting. The 2017 World Junior silver medalists scored 145.42 points which added up to 220.40 points overall.

“We were happy to skate clean and to show not bad skating in my opinion,” said Kozlovskii. “The level of the pairs event was really high. It’s really rare that the junior teams got so many points. Russian Nationals is one of the most interesting and hardest competitions.”

2018 World Junior Champions Daria Pavliuchenko and Denis Khodykin turned in a clean program to the “Great Gatsby” and produced a side-by-side triple flip. They moved up from fifth to fourth at 209.15 points.